Part One: Is Touring Really Necessary in 2008?

In the Music 2.0 Without the Bullshit rant, I addressed this all too breifly:

CD sales are down, revenue is down.  Guess what?  So is the value of the American dollar. Not coincidentally, food prices and energy prices are through the roof and gold is trading at record highs.  It is beyond surreal how many pundits and bloggers discuss the music industry as if it exists in some cocaine expense account wonderland.  Everyone quite simply has less money than they used to.  This trend is going to continue in 2008.

Since I wrote that, things have continued along the same trends-gold prices are still rising, there’s food shortages being reported around the world.  I’m not saying “I told you so” because honestly, I don’t want to be right.

This is something that needs to be considered-sooner rather than later.  With regular gas consistently hovering around $3 per gallon, your choice of vehicle becomes one of the most centrally important questions of any touring expedition.  I’m going to repeat some really obvious advice here: Never do a tour without doing a detailed budget first. Accounting is the most crucial skill you can learn, and if you’re not comfortable with spreadsheets, you are utterly doomed.

It also raises the stakes on merchandise sales and multiple streams of passive revenue.  This is where controlling your whole operation becomes critical, too-because if your online revenue sources are going to someone else before you get a cut, that’s gas money.  If you’re not already doing budgets and tracking expenses, start immediately.  Not having Excel is no excuse-get on Google Documents and start laying out the costs of doing what you do. Even if it’s not your money, even if you’re doing nothing but charging headfirst into debt, it’s still important beyond words to have the numbers on your operation.  Those numbers have to be accurate and organized or they’re worse than useless.

I’m going into all this so that you can work through the question yourself-are you really in any position to go on tour?  How much merchadise will you have to be moving at every show to keep the roadshow moving?  What’s the maximum number of people you can bring along?  Will they be living comfortably or eating one another alive after 2 weeks of travel?  …that sort of thing.  For experienced, well-written and practical advice on the business of touring, I definitely recommend the articles of Jeri Goldstein.

So to kick off the conversation, and lighten the damn mood a little bit, I’d like to share one uniquely insane option with you.

Here’s an alternative I get a kick out of, but I don’t exactly recommend: you can always book the shows and just have someone else play them for you. That’s the system that underground hip hop legend MF Doom hit up recently, and the results are somewhere between “genius-level promotion” and “career suicide.”

His scheme has been the subject of endless message board rants-and one hilariously good Village Voice article-but here’s the basic punchline: 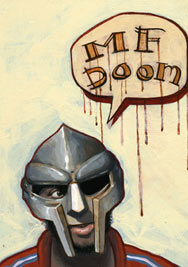 “The first thing out of my mouth to my buddy was, ‘Wow, that doesn’t even look like him,’ ” says concertgoer Dan Schwab, a buyer for Adidas who flew down from Portland, Oregon, with his girlfriend to see the show. “He looked way skinnier-at least 30 or 40 pounds lighter than the guy I’ve seen before. The guy who was up onstage was just walking back and forth, doing a little bit of the ‘rapper hands’ action and giving high-fives.”

“I went up to the sound guy about two songs deep and said, ‘No one can hear Doom’s mic.’ He looked at me and said straight-up, ‘I know. His mic’s not on, and that’s not MF Doom.’ ”

Having performed only a handful of songs, whoever it was abruptly ended his set and fled the stage; attendees booed and tossed water bottles. Doom’s scheduled Independent show the next night was also canceled, as were the seven remaining dates on his tour.

Yeah, that promoter will never book MF Doom again-but so what? There’s 10,000 other promoters who will.  Details are still sketchy, but Doom’s management is claiming that this whole stunt was actually deliberate promotion for an upcoming album, Doomposter.  I think it’s a fascinating experiment, and I’m going to keep following it.  How many bridges can you get away with burning before you’re stuck by yourself?  How much can you take advantage of your fanbase and still be selling CDs?

Before you start marketing the Andy Kaufman way, have a reality check on me: you’re not famous, you don’t have a catalog of over 20 albums dating back to the early 90s, and you’re not doing joint promotion with Adult Swim or super-producer Dangermouse.

Of course, that also means you’re free to experiment and define yourself however you please.  Up next, I’ll be looking at a collection of case studies-bands and rappers who’ve made a name for themselves without relying on touring.  (Without doing shows at all, in some cases.) I’ll be breaking down the tools and technologies they used, and most importantly, laying out the five common threads I see in all of the examples-the Core Elements.