Love Thy Hater: How to Learn and Profit from “Bad” Feedback

This is about how to take criticism and profit from it. When I think about what separates successful music entrepreneurs from the rest of us, this is one of the most important differences.  They don’t catch feelings, they just listen and learn. Pretty much once a week, I deal with artists who cannot take criticism without being insulted. It’s a widespread and common problem that’s way bigger than hip hop.  This is about making the change to an open, successful mindset and turning your haters into a business asset.

First, though, a couple basic points:

1. This is a business, not a talent show.  That’s real simple but 90% of rappers will still complain about their skills getting slept on.  There are seven billion human beings on this planet and every single one of us is going to die.  Getting over yourself is the best business investment you can make…and it’s not easy.

2. Life is not fair because there are no rules. The main test of character you face in life is what you decide to do after you finally realize that.  Is that an opportunity or a tragedy? Your call. Nobody is there to referee the game. You will have triumphs, you will have setbacks, but the game itself is never over.

3. If you really thought you were the shit, you wouldn’t need to prove it.  Arrogance is actually not confidence, it’s insecurity.

Humility doesn’t come naturally, especially if you were born with one or more testicles. It’s a learned skill, and like any other skill from playing drums to evading police, you learn it through practice.  I also know for a fact that anyone can do this, and I know this because of Louis Mackey.

Now, Lou is not a calm person.  In fact, he has rage issues that bring his mental health into question, and that’s exactly why I’m bringing him up here.  You see, Louis Mackey has thrived by embracing critical feedback, and no matter how much furniture gets broken in the process on his end, he still pretends to handle it well online.  I hit him up for an explanation, and…well, this is Lou in a nutshell:

“I want the harshest, most brutal feedback that can be given. Coherency is one of the most fundamental questions I want answered; not just lyrically, but sonically. Everyone thinks they’re an audio engineer these days but getting feedback on ambience, loudness and fullness from a few well trained ears goes a long way. Some of the smallest nuggets I’ve ever received from professionals have been the most essential building blocks to my production game. In the realm of lyrics, I like to think I’ve kind’ve surpassed feedback structure-wise and stylistically but it’s always nice to hear a net-jester’s opinion.”

I came into contact with the West Coast one-man-business TAIS because I didn’t like one of his songs.  I also left a comment explaining why on the Potholes blog, and I promptly got a follow-up directly from the artist himself.  He was writing to express his obviously honest gratitude for me taking the time to listen to his music and give feedback.  There was no sarcasm or anger at all, and I was surprised enough to check out some of his other tracks.  As it turned out, I just hadn’t liked that particular track, and I wound up digging a lot of his material. I also wound up doing an Audible Hype interview with him that turned out awesome.

Right now, he’s working on music for a movie soundtrack and a new EP, “Life Is Simple.” I caught up with him for the shortest interview he’s ever done:

What inspired your wide-open approach to feedback-did that come naturally or was it a process getting there?

TAIS: It was a long process getting to that point, but I think it was a natural progression as I’ve gotten older. When we are younger, most of us have that inexperienced “you can’t tell me nothing” mentality. It isn’t until we evolve/get older that we can set that aside and realize that everyone has thier own opinions, likes, and dislikes. So for me to be offended by the fact someone doesn’t like me or questions my art, only shows weakness on my part. I’m also a person that likes to talk and understand what makes people tick, so engaging with people who might hold a different perspective is an opportunity to learn. Lastly, I’m just glad to see people are at least listening. The least I can do is thank them for do so, because at the end of the day, it means my work hasn’t fallen on deaf ears.

TAIS is paying close attention to blog comments, and you should be, too.  It’s essential to have Google Alerts set up for every keyword that matters to your operation: the name you perform under, every release and project you’ve got, and any brand names you’re doing business with.  When you follow up with people’s comments, remember to focus on questions, which can be trickier than it sounds…after all, “What the fuck is your problem, man?” is technically a question.

Another hip hop entrepreneur who takes criticism the right way: Oddisee.  I’ve talked in detail about Oddisee’s vision and business model before, so it’s no surprise that he’s worth studying on this front, too.  You see, it was actually Oddisee who first got me thinking about subject, six years ago. Back when I was still thinking in terms of getting signed to a label, I was already studying interviews with everyone in the industry.  Printing ‘em out, taking notes…fuck yes, I’m an honest geek with piranha teeth.  One of the best sites was Urban Smarts (RIP and thank you) and that’s exactly where I read this Oddisee interview back in 2004:

Urban Smarts: Now, you first got in touch with us to get more feedback on some criticism I wrote in a review. But you’ve done it very respectfully, while others often enough just curse me out. What does criticism mean to you?

Oddisee: Criticism is the opinion of one human and humans are pure emotion. So unless the critic has a uniform guideline to judge what ever he/she is critiquing, it’s simply another opinion. And opinions don’t matter cause everybody has one. So when I read critics saying: “it’s good, it’s bad, it’s wack, I’ve heard better”, etc. - these are opinions that the next critic to judge it will most likely disagree with.

So when I get this type of criticism, I ask for more detail: was it my mix, was the emcee wack, was the structure wrong, has it been done before, are the rhymes elementary, was the hook weak? I want to know these things. If enough people say them, I’ll learn from it. And overall it can help the listeners become better listener as well.

When I dug this quote up, I realized I’ve never once applied it to my own business.  I’m always grateful for reviews, but I’ve never done what Oddisee did, and followed up privately with a reviewer to ask for further feedback.  That’s a dedicated mammal, right there.  Humility is endless, and every day is a new opportunity to step our game up…this particular Sunday is no different.

So far, we’ve covered only one avenue for getting feedback on your music: blogs. Reviews and comments. That’s not enough.

What you really need is a private feedback loop. When Dr. Quandary was working on his debut album, Beyond All Spheres of Force and Matter, he put at least three years of work into it that I’m aware of.  That’s because I was part of a small group of producers who’ve been sharing their material for critical feedback for years now.  Quandary remixed, re-thought, and completely destroyed that album over a dozen times before he was satisfied.

We’re not trying to make a brand out of this group, although we used to call ourselves Eastern Bloc. What separates us from an informal group is that there’s absolutely no sharing outside of that small circle.  We always get back to one another with feedback and we never spread what we get until it’s actually released. Those are the only two rules because they’re important. I’m not saying you should stop what you’re doing now, by all means share whatever with family and friends, but still, it’s important to have a group of people who respect each other as professionals.  That’s a different kind of environment and it helps us all keep our brains in the game. 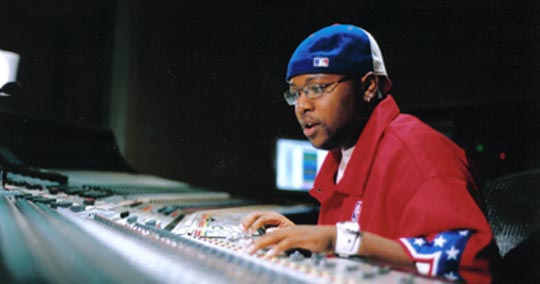 Everyone wants to get on blogs, but here’s another neglected source of feedback in 2010: good old messageboards. From 2000 through 2005, they went from being a goldmine for simple and powerful DIY promo, to a nightmare circle jerk of rap spammers all advertising at one another.  Once the scene was over-run with competing carbon copy clone forums, things fell apart. One forum that’s survived (in style) is the notoriously brutal Philaflava, and back when Alex Minor was called Godamus Rhyme, I was always amazed by how well he handled criticism. Even shit that was nowhere close to constructive and probably qualified as hate speech in a Federal court.

“Taking criticism is all about keeping things in perspective. At the end of the day it’s your art, but people are going to think and say what they want to. You’ve just got to be willing to sit on it for a few minutes before you react or respond. Ask yourself questions about what was said and what your immediate reaction is to hearing it. If you can get to the point where you can step away from the situation and really analyze folks’ reactions, you’ll really start to grow as an artist.”

Can you grow a thick skin, or at least learn to fake it? Will you make it a part of your daily routine to put your music at the mercy of total strangers?

Feedback: It’s Not Just For the Music

I work for World Around Records, but we’re not really a record label.  My canned response to 99% of the submissions we get is “We have way less money and access than you think. Thanks for the music, but we’re not what you’re looking for.” World Around is a promotional platform, and our artists are truly independent.  We encourage them to do business outside the “label” because we just don’t have the resources to compete with…well, anybody.

Hip hop is so over-saturated that we still get a steady stream of submissions and requests for feedback in our humble little inbox. Obviously, I wrote this because of how consistently artists will send me pissy emails in response to feedback-even very tame stuff, like mixing details or reverb levels on hooks.  I mix and master tracks, too: I can understand why the thought of having to go back and fix shit would enrage you.  I don’t understand what the fuck that has to do with me.

In the end, though: it really is on me. I’m the chimp who is dumb enough to keep on doing this, right? If I expect these cats to be grateful for my attention and time, that’s every bit as dumb as them…so yes, I bring it upon myself.  I will continue to bring it upon myself, because the fact is, great music takes time and work and the world really needs great music right now.

AT LEAST, THAT’S MY OPINION. How about you?