Man Mantis: Playing the MPC from Studio to Stage

I’ve already interviewed the Madison hip hop scientist Man Mantis once before, and this is a richly detailed follow-up interview.  We’re talking about the recording and mixing process for the latest dumate album, We Have the Technology, and going in on the technical, practical side of using the Akai MPC as a tool for both composition and performance.

JB: What are the most valuable lessons you’ve learned working with Jim Newhouser on the creation and mixing of this new album?

Man Mantis: A lot of what I learned from Jim during this project involves the more technical, less sexy side of audio engineering.  For example, halfway through the recording of the album (which took place in four different studios) I started using a Logic template that was set to record at 48k rather than 44.1k.  I tried sample converting to 48k using Logic’s processors, and even though I couldn’t hear the difference, Jim was not happy with it.  So we ran two Mastering sessions, one at each sample rate, and then converted the 44.1 masters to 48k using Jim’s Apogee converters.  There’s a reason that shit is so expensive.  Obviously I am recording at 48k for all projects right now, but Jim explained to me on the last day that when you are recording/mixing for CDs, which are going to wind up at 44.1 anyway, its best to record at 88.2k.  This gives you great frequency response etc., and when you convert to 44.1 the math works out a lot better than converting from 48k. 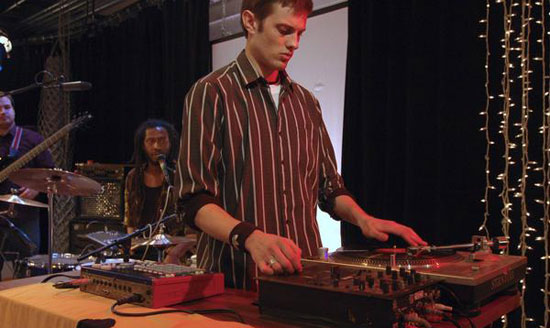 JB: What was your process like for expanding and enhancing the beats and raw tracks?  Was this a big project or a long process?

Man Mantis: BOTH.  If you consider the song writing process, “We Have the Technology” has been in the works for at least two years.  When it came time to record the album, we had a lot of discussions about how to make it sound less “bandy” and more like a hip hop record.  We started listening to a LOT of Roots albums, and eventually decided we wanted to try recording the raw samples/instruments and then chopping and processing them through the MPC 2000 XL and Logic’s ESX24 sampler.  So I would put the beats together in Logic using shitty canned drums and then we would record all the bass/vox etc.  After most of the album had been recorded, we went back through and recorded some individual drum hits and loops from (drummer) Jah Boogie’s kit, which I dropped into the ESX24 in place of the shitty drums.  This allowed me to get beat sketches done quickly and then come back later to get everything to bump right.

About a month before the album was supposed to come out, I started listening to all the tracks and I realized that while the verses were all pretty dope, we were a little lacking in the bridge/hook department.  We’d been doing a lot of interesting stuff live with tracks like “Trouble” and “We Have the Technology” in terms of breaking them down, so I started listening to live dumate recordings and trying to translate some of that into the songs.  So that fixed the bridge problem.  But I noticed that the songs still lacked a certain degree of “hummability.” If you can’t hum a song after you hear it, you won’t remember it.  So I sat down with this shitty $10 electric organ that I have and started trying out lead lines over some of the hooks, and then translating those into Logic using its ES1 synth and effects like autofilter and distortion.  That gave the songs a more layered sonic landscape and gave the album what I consider at least to be its “sound.”

JB: What suggestions do you have for other hip hop producers who’d like to start working with live instruments in a live context?

Man Mantis: Find good musicians to play with.  When we started with dumate, I had no idea how it would work.  So I just brought beats I had made into rehearsal, muted the bass and drums tracks, and we started jamming.  We don’t play to a click track or anything, all the samples are triggered individually, so its very important that Boogie and (bassist) Bobby P are on point, which they always are.  Fucking up while tiggering live samples isn’t like fucking up on any other instrument; if I miss a sample during the hook then there might be two to four bars of silence, or I might miscount the bars in a verse or bridge and bring back the hook too soon/late.  In this case I rely entirely on Boogie and Bobby P to keep the show going.  Otherwise, I would recommend staying away from the MPC 1000, at least for consistent live performance.  The glue that fixes the electrical contacts to the bottoms of the pads on a 1000 is pretty brittle, and my pads started to die about two years after I got it.  I had to move samples from the tops rows of pads to the bottom rows, and eventually had to ditch it all together for the 2000 XL, which has nice sturdy pad-glue.  I haven’t really experimented too much with MPD pads linked to Logic or something like that, partly because I am lazy and partly because I think that limitations are in many ways conducive to creativity.  I’ll probably have the start figuring that out as dumate’s sets get longer and more involved and we have a bigger catalogue to play from, but for now the 2000 XL has been all I need.

JB: What kind of equipment is needed to run the MPC onstage in a club setting?

Man Mantis: I actually just plug the MPC right into two DI boxes.  There is no computer involved, no MIDI or click track or anything like that.  I was running it through a Rane TTM 56 mixer for a while to give myself control over volume and EQ, but one night the mixer was acting funky and I plugged right into the DIs from the MPC and the sound quality was much better.  I’ve never used Serato or MainStage or any programs like that during our sets…it’s pretty much just me and the drum machine.

JB: What are you using for backup storage? How do you protect your sonic assets?

Man Mantis: The MPC 2000 XL saves to zip disks, which is my primary storage for dumate stuff.  I have all the programs backed up on a computer as well, and because most of the stuff from the last album was made on my now defunct MPC 1000, there’s versions saved to compact flash as well.  My basic philosophy has been not to rely on anyone system/media, and while it can be a headache to locate files sometimes, I have to date not experienced any massive data loss.