What’s worked for you in 2009 in terms of keeping organized? Do you have a sample management system or a large haystack of .wav files?

Man Mantis: Its a haystack.  I’ve got stuff saved on hard-drives, zip disks, compact flash, and all of it is named something completely irrelevant.  I try to keep stuff separated by project, but within that system is a lot of chaos.  When I upgraded to Logic 8 and bought my desktop I made a hard backup of everything I’d done up to that point, and I would definitely recommend it if only for peace of mind.  Since I save the sequences I make on the MPC 2000XL on zip disks and then mix them as logic files, I have multiple copies of most of the stuff I do saved on different media.  Its a fucking mess, but its vastly preferable to keeping everything on a single drive.  My new desktop has the Time Machine backup system as well, which is ingenious and highly recommended.

Whats your beatsmith process these days?  Do you sit down with ideas laid out or experiment for awhile first? 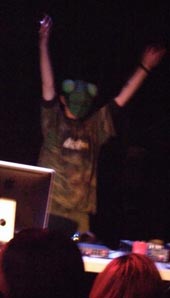 Man Mantis: Everything starts out on the MPC 2000XL, which I picked up earlier this year.  Before that I was on the 1000, which I now realize is a piece of shit.  Yes its USB capable and you don’t need to link pads to stack sounds, but the pads are much stiffer and lose their sensitivity as the glue holding the electrical contacts to the underside of pads wears out.  The pads on the 2000 are pure butter and built to last.  I’m definitely a pad person, and as I’ve been experimenting a lot with drum timing recently the 2000 XL has a lot of goodies.

I’ve found myself making more and more beats with the timing correction off, particularly to achieve a Detroit swing on my hi hats.  Its possible to do this with something like Korg’s Electribe, but it takes a lot of fucking around to imitate what are basically the mistakes a human drummer makes in keeping time.  Its way easier to get that slightly lazy feel by just tapping out patterns without quantizing.  I also just stumbled across a window which lets you shift a single track a little earlier or later in the time signature.  If you’re trying to emulate the Dilla/Black Milk sound, this can be done by making your kicks a little early and your hi-hats a little late.

After I get something that I like on the MPC, I record it track by track into Logic to mix and arrange.  I’ve been getting a little bit into using Logic’s native ESX24 sampler so that I can use the MIDI step-edit window to arrange stuff, but that’s kind of tedious and most of the time I just record analog audio files and chop and loop them.  Most of my experimentation these days has been with mixing in Logic.  One thing I’ve noticed about a lot of the producers I meet, even relatively successful ones, is that they don’t mix their own beats.  I think this is a terrible mistake.  In fact a lack of attention to production value is the single biggest problem with a lot of new hip hop.  If you listen to albums like Midnight Marauders, or anything by The Roots, their is a lot of experimental, even psychedelic stuff going on in the mix.  Game Theory

in particular is one of the most sonically mind-blowing albums I’ve heard.  Ever.  I highly recommend copping it on vinyl.

A few of the experiments I’ve been doing myself involved lots of bussing and playing with first reflections.  For example, I usually bus all the drums in a track to a compressor and perhaps a little distortion, and then pull it back 18 to 21 dB.  This gives a little extra body to everything.  First reflection is a term I learned from dumate’s sound engineer, Jim Newhouser.  Basically the idea is to reproduce the extremely fast echo that happens when sound hits a wall in a normal room.  By putting a very fast echo (1/16t if your echo is set to the track’s BPM) and pulling the wetness down can make something sound a lot louder without having to turn the gain up.  Ideally, you shouldn’t even notice the echo, just an increase in volume and clarity.

Man Mantis:I immediately want to say the MPC 2000XL, but since I’ve pretty much covered that I’ll talk a little about some of the other things I’ve used and liked.  The Micro Korg

is not really a secret among producers anymore, but its a beast.  Its got tons of freaky bass pads and I am a particular fan of its Rhodes voice.  I recently was asked to put together a project studio for the Community Center where I work, and when informed of the budget, immediately copped Pro Tools 4.2, an 003 rack, an Novation 25 SL and a bunch of other goodies.  I have no idea how any of this stuff works, but fucking around with it has been awesome.  However, I am very hesitant to make a full jump to native samplers like Logic’s ESX24 and whatever Pro Tools has…I prefer getting started on something hands on and physical like the MPC.

Did the whole mastering process for Books on Tape change the way you mix beats at all?  Did you feel it was a major change or more of a subtle enhancement in the final product?

Man Mantis: Yeah, mastering that project (or rather, watching Jim Newhouser from Studio Earth Remote Recording master it) made me realize that I didn’t know a goddamn thing about preparing a mix.  When I get a beat together on the MPC I usually sketch out the levels I want by using the MPC’s mix window.  But for a long time when I transported those tracks into Logic, track by track, I would record all the tracks at the levels I had mixed, which is bad.  I learned that when you do a mix you should really never have add gain to a track, because this adds so much noise.

Since that project, I record each track into Logic at the loudest possible level without clipping, and bring the signal down from there.  I never push my faders up past 0 dB, and if I need to add volume or body I do it with compression or EQ.  Jim also told me that when you mix in increments of 6 dB, the math works in such a way as to make things much clearer.  I don’t know if this is true, or how anyone could possibly know this, but I have to admit that I have been very happy with the mixes I have made since adopting this technique. 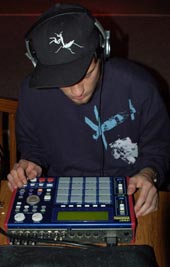 As far as the mastering process for Books on Tape goes, it was a major change from what I came in with.  Honestly, a lot of the beats sounded like absolute shit.  We first started working on Books on Tape in the summer of 2006, and it came out in August of 2008.  Which means that what came out in 2008 were beats I had made in 2006, when I really didn’t know what the fuck I was doing.  But we knew that at their core the songs were solid, and so we just tried to learn all we could and apply it to what we were doing.  It just took us two years to get it right.

here do you want to take things for 2010?  What emcees would you like to be working with?

Man Mantis: I’ve been dedicated to several in-depth projects over the past few years, which hasn’t really left me with the opportunity to seek placements or approach new MCs.  The STINK TANK project took about two years just to get off the ground and now we are in the thick of marketing that, and over the past year I produced a full-length LP for former Madisonian OX and half of Natty Nation’s latest album Reincarnation.  Right now I’m hard at work on the full-length LP for the band dumate, which I joined in ‘07.  I’ve also been working on a free LP for World Around Records and a mixtape of new STINK TANK material, both of which are slated to drop this summer.  So my number one goal for 2010 is not to be still working on these projects.

The trend in hip hop right now seems to be quantity and free digital access, and I hear rappers saying “Yo yo I recorded forty-three tracks yesterday!!!!  Check out my myspace!!!!”

Its hard to be an artist who puts a lot of time and energy into creating a thoughtful product that’s properly mixed and mastered and has decent artwork, because people don’t seem to appreciate these things as much.  It’s all youtube dances and ringtones.  So figuring out a way to master these platforms and still maintain a standard of quality and artistry is important for all hip hop artists if the genre is going to survive the dilution its going through right now.  But that’s kind of like trying to make a gourmet TV Dinner…If I were to seek out some established MCs in 2010 to work with, I’d probably try talking to Gift of Gab and Lateef, who dumate opened for in Madison a few months ago and hit it off well with.  I would do unforgivable things to do a track with Masta Ace.

You’ve been writing some great meditations on crate digging and vinyl culture on your blog, Can You Dig It?-is vinyl the core of your production process?

Man Mantis: Absolutely.  I’ve been heavily involved in hip hop education for the last few years, mostly in the form of bringing my equipment into Madison schools and doing beatmaking demonstrations.  One thing I do when explaining sampling to kids is to point out that all forms of art can be reduced to human creativity expressed through a limited medium.  Painting is creativity limited by the properties of paint and canvas, writing is creativity limited by language.  The is a reflection of the fact that our comprehension of reality is itself limited.

I’ve found that working within the limit of prerecorded allows me to do much more creative things than I ever could with a synthesizer.  I’ve always been a producer that chopped samples, but recently I’ve been doing more and more to twist things around and create and interesting sound.  I’ve been experimenting with reversing samples, or reversing parts of samples, and with adding effects like a subtle chorus or filter to make the sample move around the mix in an interesting way.  But I think ultimately I am just drawn to the traditions surrounding digging and sampling.  At the end of the day, I like digging through old records and fucking with them.

Check the Documentary, Too: