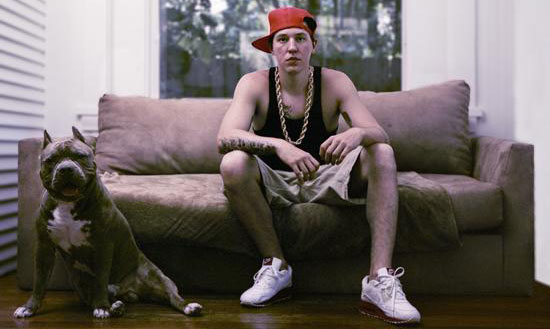 JB: What’s been working for you in 2009? What tools are you using to organize and promote your music career and the 10,000 details that come with it?

Protoman: 2009 has been an ever changing experiment. Since the quick downturn in the American Economy this past year, the music business had been affected heavily. I find myself giving a lot more stuff out as free downloads, and not expecting as much as I did a few years back.

I’ve even started selling merch at shows for cheaper. I’d rather get out 10 CDs for 5 dollars apiece, versus 5 CDs for 10 dollars apiece. It balances out and fans see your giving them a break. Its only going to help me in the long run once the economy bounces back. That one kid who spent his last 10 bucks at the door will get a free CD from me. In the future I’ll see him again, he’ll be on better terms financially and he’ll express his gratitude by buying a few CDs and a shirt perhaps. Its all about balance.

JB: Is Audio Thrift Shop all you, or is there a larger team working behind the label?

Protoman: Audio Thrift Shop is a collective of people on a DIY platform. Cult leader Jasper Delaini is our brains. Its a brand. Its a big network of South Florida supporters. When we are making a project we have direct access to recording, CD pressing, Stickers, Shirts, Live Sound, Etc. We all work together to benefit one another.

Example: Joe Blow prints shirts and raps. John Doe audio engineers and raps. Joe barters with John. Shirts printed at cost for a mixed track or two. We help each other out to all move forward. This is essential in building a local scene. You cannot succeed by yourself. We can all work together to get what we need. Audio Thrift Shop is a prime example of how to do that.

JB: How do you guys do internal accounting at Audio Thrift Shop? Is it all personal barter deals or is there a set of “books” for the karma points and business flow?

ATS is budget rap. I don’t think we’ve ever done accounting. Everybody down has other things going on, other projects being put out on labels with a more standard approach to numbers. We’re pretty much based on handshakes and trust. Like recently, Dead Truth Recordings, a Florida hardcore based label, reached out to us. The owners are our friends. Some of the guys signed to the label you’ll see at our shows in attendance.

The label just got a good distribution plan and offered to put out some of our projects.. No strings attached. No contracts. Maybe we’ll even do a collective tour of Hip Hop and Hardcore. Basically, it’s a more stress free and fun way to put out records and throw shows. Everybody who is associated is always working with other deals, other labels, artist, managers..but when it comes time that you put something out your self, we represent Audio Thrift Shop.

JB: What are the biggest management mistakes you see other DIY artists doing these days?

Protoman: The biggest mistakes I see made are artists getting played. Artists trusting a promoter and getting hustled. I was recently in LA looking for gigs and was disgusted at a thing called “Pay to Play”. This is where a up and coming artist pays a promoter to open up for a bigger name. This is crazy to me. Its bad enough when you have your fanbase come see you, paying at the door, and you don’t make a dime. But you paying?!? Artist have to know their role. Don’t make money off your drive and skill for someone else. Don’t get played like that. Throw your own fucking show. Promote your own flyers. Get some local artist to open up for you. You can’t take a shortcut and just pay to open up for a crowd who didn’t come to see you in the first place. If you work hard and mess with shows the right way its only gonna reflect outward on your fans. They will see how hard you’re grinding. They are going to support that. Biggest mistake, DON’T LET PROMOTERS HUSTLE YOU. Know what you’re worth.

JB: What’s your dream technology for 2010-something that would make your life and business an easier, more efficient hustle?

Dream Technology? It’s already here. The Internet. I secured a digital release and fully funding promotion with video from Rawkus with the Grey Area LP from the web. The label never seen me perform. I never met them personally. Never sent in a press package. They saw my site. Saw my plays. Saw me through a computer screen and signed me on. I am no way saying that it substitutes for the conventional way of interacting your music career, but it makes it alot easier.

Besides the Internet, I would say time travel. I would travel back in time and execute the newest trend (which is old in the present) before anybody else who had established it in the history books. That way I’m promised millions of groupies and smooth vodka. I would be at the forefront of party rap, gangta rap, hardcore, bling, underground, crunk, and hipster. But you know what? Maybe it does exist. Maybe I have traveled back in time and am standing in the limelight of the next current trend that’s about to explode that you don’t know about yet.

JB: For the readers who are starting their own collectives, what are the common or deadly mistakes you’d warn them about?

There are so many mistakes I see man..primarily, because I’ve had to partake in alot. But, I’ve learned from them. Some advice I can say to cats who are starting off and investing money are: Don’t be a dick. There are tons of people I dislike but I stay professional. Make freinds with everyone. Don’t kiss ass, but show mutual respect. If they disrepect you, then fine, be a dick back. You never know who you’ll meet through someone else you brushed with. Most people act as a vehicle towards a bigger person with a bigger opportunity. Get your live show on point. I can’t stress this enough. This is your only real way to making money in this industry. Venues are flooded. Everybody is a booking agent now. Stand out. It’s a show. Not you rapping muffled into a mike with no DJ. Make it big. Bring guests on stage. Rehearse. Throw free shit out. Freestyle about the crowd. Be creative, spontaneous, and non routine. People will come out to see you every time.

Artwork/Graphics. With the mandatory way to market, via internet. music has to have a face. People get bored listening to a song on the computer without a visual to accommodate. Peoples senses are burnt out. Everyone has ADD. Make sure your websites are colorful and full of dope shit. Pictures of you, banners, show flyers. Make a video for everyone of your album tracks on YouTube. It doesn’t have to be you performing. Just anything interesting. Re-use footage. Editing is easy. Ghostface Daytona 500 that shit.

One last thing is, don’t show to much of yourself. You’re an artist. You have a stage name assuming. Don’t get too personal. I recently read Trent Reznor deleting his Twitter account because he was tweeting (I cant believe I just used that word) about his newly sparked love life. Fans don’t want to hear that nonsense. They want to hear Trent fucking them like an animal and the world without love. Anyways, What I’m saying is, reflect your music. That’s what you’re known for. Always keep on your mask. You’re a superhero. Clark Kent was a pussy.

“I’m Very Proud of My Accomplishments”

“I finally finished up a project I have been working on closely with my homie DJ Trippin’ over the past few months. The idea was to take a handful of my freestyles, studio tracks, and b-sides I’ve recorded over the last year and combine them all to a 1 track mix.” All mixing, scratching, and juggling was performed by DJ Trippin’ 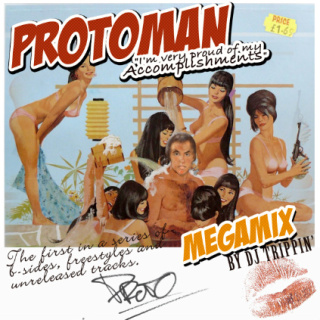