What’s worked for you in 2008 in terms of marketing and promo? What kind of tools and tech have helped you stay organized lately?

Scroll: Well I guess first off, some more money to throw towards marketing could have helped out in 08. The longer I do this, the more I realize everything is about your market (in general) and then your marketing. But I guess the Internet has become the best tool I have at this point. Its very easy to contact all the man-children you know now scattered about, and coordinate various things. I do pretty much everything, from graphic design to booking with the ol’ laptop. With the upcoming releases, and a full time job, its looking like I’ll be turning towards management this year, but I’m still waiting to see where the albums go, I guess.

What got you interested in pursuing management? Did you discover a natural talent or is it based on traumatic experiences?

Scroll: Yeah, the management thing has just come over years of writing e-mails, returning e-mails and haggling over guarantee’s, and lots of flyers and postering, etc. It has just come to the point that, I’m sure there’s someone better than me at it, and I just don’t have time. For the first time I’m looking at label interest, and with a job, I need to work, then do music. The time just is not there, to try to put the PR in as well.

I think its a logical move for artists who want to just do music. Your putting in countless unpaid hours, might as well pay someone to do the work, and focus more on the real “art at hand” if you will. And at some point if you get enough notoriety, or an upstanding label, management will follow, it’s just part of how it works. Maybe you’ll have to pay at first, maybe you’ll have a product that someone thinks is worth working for, aiming for the long run deal.

Big venues will not even accept press material from non affiliated acts anymore. Meaning you want to open a show at the House of Blues with no management? Go fuck yourself. Makes one reconsider, either bombing clear channel and live nation or….find some fucker with an agency backing him. 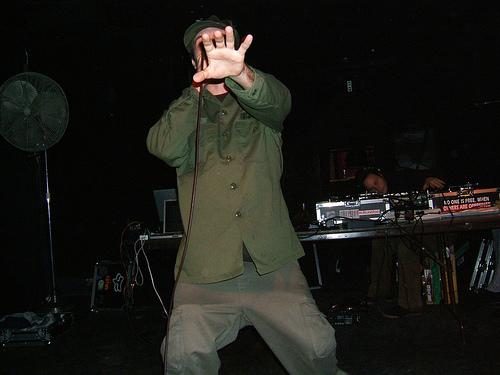 Why do you think there’s still such a leadership vacuum in underground hip hop?  Do you see any movement towards an artists union or at least an “industry blacklist” of shady promoters, venues, bookings agents, etc?

Scroll: I discovered this recently, and I think understood it in full only in the past year or so…as I probably for the first time, went from “another rapper” to a viable act in the eyes of a lot of venues and promoters. Because of how accessible marketing is (on some level) because of the myspace era, while it is incredible for the everyday guy, it is now impossible to quality control. Venues and promoters are forced to look at acts now as draw, and draw alone.

Thus, if you happen to be “indie hip-hop,” they know that no one will probably like it… and therefore, how many of your friends can you get out? How much can I make off of you feeling like a rock star? Then there’s being able to provide an evening of listen-able music based on actual music not how many of your boys turned out. The direct effect is, the one really good indie hip-hop act, that should be getting out there because of how good they are, has to face the onslaught of genre chains now attached to the pile of bad acts that are now so accessible, and impossible to decipher between.

Not sure I answered this one…just ranted. I think no matter what, it sucks when you rock and the promoter does not give you any cash.

You’ve bounced around the country more than most mammals-what are your favorite local scenes to play shows and stay inspired?

Scroll: As far as scenes go, I guess they all serve their purpose. For me, Boston works out the best, it is large enough to be able to open larger bill / venue events, and also not run into everyone you know…every day. I also like to hide outside cities, and be able to travel in, Mass lets me do that. Hide by the beach, go play shows. Smaller cities like Burlington are great to get your foot in the door, but its very easy to get played out, and seemingly repeat goals you’ve already accomplished…on frequent basis…potentially indefinitely.

New York city is great for trips, not careers in my limited opinion, and for some reason, I just did not like the Portland scene at all. I think its important to live where you’re happy, if you’re good, you’ll find some shows to play, and can always travel anywhere to gig. Scenes are good for support or to build you up, but it also sometimes traps acts…big in a local scene, but that’s it.

Now national scenes are great…like the festival music scene, probably the best way to get your music out there now-a-days. That’s what I think, anyways. Those fuckers love the tunes!

Has working the live sampler sets given you gig opportunities and connections that weren’t available before?  Have you been discovering new audiences this way?

Scroll: The live instrumental set has been huge, or sampler, whatever you want to call it. I can really make the set fit almost any bill, be that Hip-Hop or electronica/jammy stuff. Like I said the set is just very listen-able, and due to the fact that its all live, the act holds up as a performance as well. It is so much more to watch than a DJ, although still, a lot of people just don’t know what to make of it. Those who know, and get whats going on…they understand the set on a different level.

As an act though, it opens a lot of doors for venues and bills alike. I’ve been getting my music out to a lot more people for sure…I have hopes that this year will be a big one…although I think I’ve felt that way before.

What are the most common or disastrous mistakes you see cats doing with their live shows?

Well as far as mistakes go, I see a bunch of stuff, but again this is only what I think.

There are people who say all press, all promotion is good. I am not of this mind set, but then again, I’ve been doing this for 8+ years and this is the first year I feel like things are really happening (so what do i know?) With live shows, I guess the first thing is, you should not play every show just because “it’s a show.” Try to play events that work for your genre, I can’t even say how many shows I’ve played where, that weird indie hip-hop acts plays and it throws the whole show. Like the room goes from 200 to 15 people…in 20 mins.

I myself have done that at some point, but I’d like to think I figured it out quick. All music is great for what ever it does for people, not saying you have to be good to make music, do what makes you happy. But, before you go out and play a show, think about, do people really want to hear this? After I go out and hear 15 indie hip-hop acts on one bill, all before 11:00 and the headliner is on at 11:30…most of the time I don’t even make it to the act I went to go see.

People need to be able to listen to your music. I don’t even listen to my first 2 releases, its not that I am not proud of what they are, or think they are good on some level….it’s just not everyday listening music. The indie scene knocks a lot of stuff, while there is some horse shit out there, a lot of music is popular because its marketable…for better or worse. I think acts should think about this a bit more. Maybe I’d stay at shows longer, or go to indie bills a bit more. 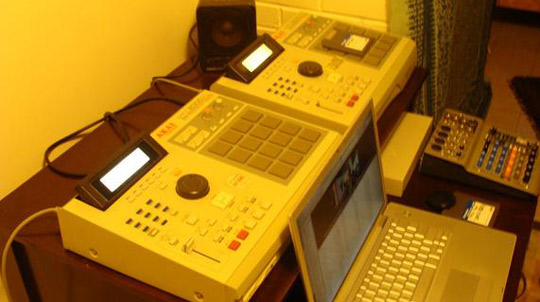 As a beatsmith, what’s your creative process these days?

Scroll: My beat process has changed a lot as of late, I went from being entirely sample based and thinking, “who is this beat for?”, to looking at every track as part of a live set. For those who missed my VH1 Behind the Music, I’m pretty much focused on live sampler sets these days. So I’m still using 2 MPC’s but now I’ve thrown a Micro Korg and an old SP-303 into the mix. With this massive pile of out dated shit I have enough room/time to pretty much transition back and forth for as long as the set requires. Another thing which i was apparently missing was that people really like stuff to dance to, so I’ve been trying to split up beats from, technical to catchy, and such, and such. Its a very different process to make beats to play out live.. like a band, vs. stuff you have someone rap to.  I still make tracks for people, but its mostly for very specific projects, where as I feel like 5 years ago, I’d make a bunch of beats and just hope that someone wanted them. I feel like I’m one of the only people I meet now that still makes beats on outdated machines…everyone loves the computer programs, I guess I’m just lazy or kind of an idiot. 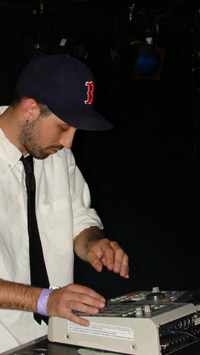 When it comes to sample sourcing-are you a vinyl purist or more of an omnivore?

Scroll: I am silly picky when it come to vinyl. Honestly, I only really sample solo artists for making beats. I like to compose music band style, I find some drums I might like, then I shoot for a first layer sample, maybe a solo banjo, or cello, guitar, what-have you. Then I go for a bass layer, then another in key instrument. And so forth. I never understood the whole, “well I’ll just take this Bobby Bland sample and put a snare hit over it, and WHAM…got a beat.”

It’s very easy to sample a classic song, the song was great, of course it will sound good if you loop its best 2 bars and put a break over it. Take the time, find the sounds, it’s well worth it. Keyboards always work for filling the missing parts at the end.

Any last words of advice for the young and inexperienced?

Scroll: My advice is this. While trying to book shows, take one method, and it is proven, over many failed gigs. Hit booking agents and venues with this e-mail.

1. What show you wish to support or date.
2. How long you can fill.
3. One sentence about your genre.
4. Where your press & music can be found at.

This is the tried and true e-mail, anything else they hate. When I first started, I remember trying explain shit in e-mails…4 lines, your web address. Works well for getting replies and landing shows.