After writing The Template: Planning Your First Album, I’ve been re-thinking it ever since.  I’d like to introduce you to Oddisee, the DMV renaissance man, who’s got a system that’s proven to work and gives us some real numbers to work with.  Diamond District’s debut album, In the Ruff

, is more than just one of the best hip hop albums that’s come out this year.  It’s also a perfect case study of how to make everything that’s “wrong” with the industry today work for you.

“If you go about putting out hip hop the old way, you’re going to be destroyed by leaking and bootlegging. If you’re still subscribing to the formula of ‘my albums done and I have to give it to press immediately 3 months before, and I have to promote a single on college radio and be underground, and do a tour 3 months before and 3 months after,’ you will be destroyed by downloading.”

If you dig Audible Hype you should definitely be checking Crate Kings-it’s the best source for news on hip hop production I’ve found.  They’re also paying close attention to the business end, and it was this video that first made me realize how ambitious Oddisee was.

“The most recent projects, they kinda came out right at the same time. Diamond District came out on April 14th, which was a group album, Mental Liberation is a compilation album that I produced, which came out May 5th, and then I dropped an EP called Odd Summer on May 29th.

Those three projects are kind of a new formula that I’m experimenting with, of putting out a limited version of those projects for free, gaining the numbers and the statistics from those, and then using those numbers to go to labels and get bigger deals once I re-vamp the record.

Same thing with Diamond District: it was 12 songs, edited, with slightly different cover art.  So now that it came out, 12,000 downloads later, rave reviews, all of the legends I look up to bigging us up, tour offers, etcetera…I pitched that album for new distribution, and it’s coming out, again, as a physical version and on iTunes.  It will have 14 songs, it will be un-edited, you’ll also be able to get the instrumentals free when you download it, it will be on vinyl…all different types of incentives to purchase something.

I believe in statistics, really. If I can get-by the time it comes out-20,000 people to download it…that means I can get, units sold, 5 to 8 thousand to buy it. Just based off sheer numbers. And that 5 to 8, translates to a “a living.”

The “new distribution” pitch found a home at Mello Music Group, which is run by Michael Tolle, someone I’d like to interview before 2010 rolls around: “We heard In The Ruff and thought ‘this is the best album of year.’ We had to document it in a physical, tangible way. MP3’s are cool, but in the end, we wanted to leave behind a cd, some vinyl “â€œ something audiophiles could hold in their hands.”

Mello Music Group pursued the same approach Oddisee does: testing the digital waters to gather data before the full release.  They led off with two early iTunes single releases: I Mean Business on Sept. 15th and Who I Be on Oct. 6th.  Both Tuesdays, in case you were wondering.  Exactly two weeks later, they dropped the full LP on iTunes.

I have no idea how it’s selling. If you do, please drop a comment and let a mammal know.

A good team matters, because DIY never really means Do It Yourself.  One of the invisible hands involved with the success of In the Ruff is the “marketing and publicity firm” Audible Treats.  They’ve got a wicked impressive track record going-Black Milk’s TRONIC, Finale’s Pipe Dream and a Promise, and Tanya Morgan’s Brooklynati.  Dope projects that were everywhere and stayed in circulation for months at a time.  There was a team behind that kind of consistency.  The front end looks like this: 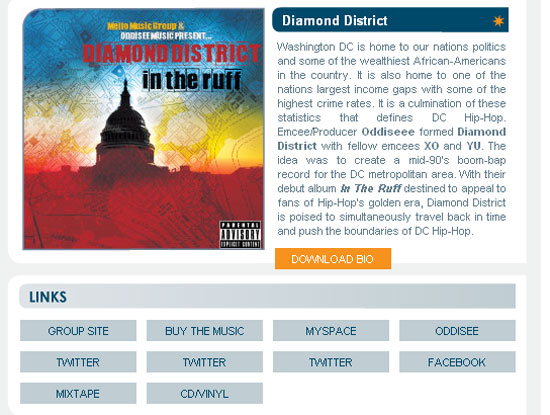 Check out how they set up their promotion page for Diamond District. Simple, clean, and it includes everything that a blogger or a journalist (or a potential corporate sponsor) could want.  Maintaining links and material like this involves attention to detail, and Audible Treats is an operation worth studying.

Writing good Bio copy is not easy, but it’s necessary.  Bad writing doesn’t have to happen to you.  Check out Greg Rollet’s very useful and powerful exercise, Learn to Describe the Crap Out of Your Music.  I’m not writing an advertisement for PR crews like Audible Treats, I’m recommending you spend some time taking notes on what they’re doing.  And steal it ASAP. Apply it to your own operation.

Remember, though, one thing you can’t replicate, swipe or copy is a network.  When you’ve got a product you really think is potential gold, it’s worth buying the attention of experienced and connected people.

“My long term goal is to become a consolidated version of Motown, to be honest. Now, Motown found artists, groomed them, cultivated them, recorded them, mixed and mastered them, and booked their tours. It was a label that did everything. And that what I want to do, but in a smaller version.”