JB: Whats your daily routine, in terms of the creative process behind your music?

Since the economy/troubled music industry evaporated my job managing recording studios, I’m doing music full time at the moment.  I get up and spend a few hours checking/responding to emails, then the rest of the day is dependent on what needs to get done.  I have an apartment in Brooklyn with my girlfriend, so certain things can only happen at certain times.

Vocals are recorded in the kitchen, (which sounds surprisingly good actually) so those have to be done before my lady gets home from work around 6pm.  The studio itself is in the back room out of the way, so if I’m mixing, that can go on until 10:30 - 11pm without bothering the neighbors.  I hate mixing in headphones, so I gotta be able to use my monitors.

Making beats however can be done in the cans, so I’m usually up till 5-6am with that.  If there’s no tracking mixing to be done, that will happen on the speakers during the day as well.

JB: As a new artist, how do you feel about the industry in 2009? Are you worried about the future or happy with the opportunities you see ahead?

I’m excited actually.  The sheer number of artists right now can be intimidating, but I’m a very competitive person, so that’s not a deterrent.  There are so many avenues for people to hear your music, and very few of them limited by controlled playlists and programming.  The accessibility is also very encouraging.  Not just from to producer to rapper like “listen to my beats,” but also just building connections with like minded people.

JB: What are the most unexpected lessons you’ve learned from promoting Of Heroes and Villains?

Well I certainly wasn’t sure about the market for instrumental hip-hop not made by a certain few producers, so the success of it has been great.  This is my first web-only release, so even with the help of a label (Backwoodz Studioz) the amount of work to create an online presence is overwhelming at first.  “You mean there’s more than MySpace?  What the hell is Last.FM?  Do I really need to post up here?” While those are exaggerations, keeping your product from getting lost on the internet requires a lot of attention.  Making it successful requires even more. 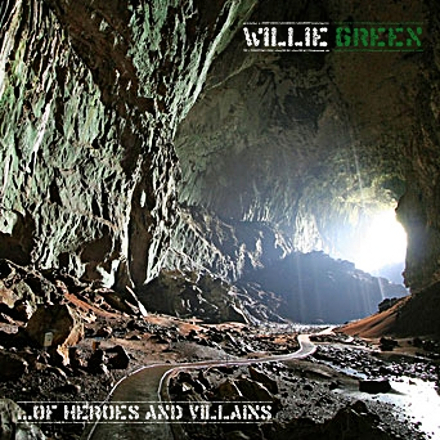 JB: What has your experience been like working with Backwoodz Studioz?

Working with Backwoodz has been great, everybody over there has been very supportive of the album.  I was making “…Of Heroes and Villains” in the background while I worked on some other projects for them, so it was done when I brought it to them.  All they said was “Dope, when do you want to put it out?” and on a project where complete control was so important to me, that was a big deal.

JB: Are you interested in other aspects of the music business, or do you want to focus strictly on making dope beats?

Well I’m also an engineer, specifically mixing.  I mix almost all my own shit, but also freelance for other projects.  Mixing is easily my second favorite part of the record making process behind making the beats.  I’ve also always wanted to work in an A&R position, although what that meant when I was growing up is not at all what an A&R is today.  It used to be finding an artist, and developing their talent over the course of a number of albums.  Now it’s a bunch of 30-somethings swapping places among the major labels searching for kids to follow each other’s pop trends.  No one can possibly take a chance on a unique artist, because if said artist doesn’t meet the inflated sales expectations, the artist and A&R are dropped.  Being an A&R at a smaller/indie label is very attractive to me, but with staffs at smaller labels being limited, it’s difficult to find a full time paying job like that.

JB: So is running a record label or doing management something you’d like to be doing in the future?

I actually ran an indie rock label for a brief time in Boston, and I can say I’ll never run a label again.  I enjoy certain aspects of it, specifically looking for artists, developing and managing projects.  The rest I could really leave.  Managing has never really been something I was interested in, that’s a little further from the musical side than I prefer.

JB: As an engineer, what advice do you have for rappers and producers getting prepped for a studio session? I get this question a lot in emails these days.

In a perfect world, I would tell rappers to write their rhymes and practice them before they actually get to the studio.  I know that’s asking a lot for some.  But if you know it takes you hours to write a 16, please prepare before you get to the lab.  And be on time.  You may just be recording at your boy’s crib right now, but when you start paying for studio time, will you want to pay for the hour you were late and the 2 hours it took you to write?  It’s not enough just to rap well.  If you want to be a professional at what you do, treat it as a professional.  You’ll receive the same respect.

JB: What advice do you have for artists looking to make video content? What lessons did you learn working on this “Making Of” documentary?

Video content is becoming exponentially important in today’s media, just having good songs isn’t enough anymore.  I see people even making videos for single verses and freestyles.  While that’s a bit much, and there’s certainly something to be said about overexposure, having something out there that gets people talking is always good.  The main thing I learned was production values are important.  At one point during editing, my girlfriend came in and asked me “Isn’t that gonna bore people?” I realized, “Shit.  She’s right,” so I added the screen shots and music throughout.  To make a thorough impression in the fast paced internet, your presentation is at least equal to the quality of your product.

The Making of “…Of Heroes and Villains” from Willie Green on Vimeo.