DJ Pain 1 is a serious talent with some serious production credits. That’s not why I’m interviewing him here.  What makes DJ Pain 1 worth your attention is his reputation. This is a guy who’s gotten his beats on albums by Young Jeezy, Chuck D and Brooklyn legend AZ-but he’s equally famous in his hometown, Madison WI, for being the foundation of their local scene.  He supports everyone, shares what he knows, helps people get gigs, spins for local acts and national names alike, runs a radio show…you get the picture. DJ Pain 1 represents a rare hybrid between world-class professional business game (how many DJs are sponsored by Sprite?) and a super-friendly, Midwest generosity. Here, we’re talking about the business of being a hip hop producer, and how to make sure every week is more successful the last one…

When you sell a beat-what’s the actual transaction? What format are professionals expecting from a producer, and how does that transfer happen?

DJ Pain 1: The transaction depends on the terms of the sale.  A lot of producers sell beats with no contracts, no formal agreements and no big money involved.  These situations are tricky because the producer may resell the beat, which is bad for the person who bought it originally, and the person who bought the beat may exploit it in a way that is unfavorable to the producer (resell it as well, make money off of it and never pay royalties, etc).  There are formal ways of selling non-exclusive tracks, but people buy these types of beats for anywhere from a dollar and up (by the way, please stop selling one dollar beats and messing up the game for everybody else) and sometimes signing papers doesn’t seem worth it.  For more formal situations, major deals and exclusive sales, there are contracts and lawyers and declarations and huge contracts and split sheets involved.  You can’t really slack on the legal side of the business in these situations.  There’s generally a negotiation process prior to the contracts being signed and the checks being written.  But the majors will try every trick in the book to get you to agree to their terms as early as possible.

Is there anything resembling an “industry standard contract” for producers selling beats?

DJ Pain 1: While I believe contracts vary quite a bit depending on the producer, the type of track, the artist, the lawyers involved, and other factors, there are certain stipulations that are common.  I’m not well-versed in entertainment law, so I can’t speak much on this particular topic.  But as far as I know, it would be rare to find two drastically different producer agreements.

How much has your routine and your process changed now that you’re working with a management company?

DJ Pain 1: With my management deal, my production is more focused, at least in a certain sense.  I’m not longer making beats for the sake of making beats— now I have artists in mind, or at least certain styles and sounds, that drive a higher percentage of my production because I know who is looking, who we as a team have relationships with and what standards are expected.  But it hasn’t made me do any 180’s, I’m just treating production more of a love-turned-career now.

What made Lavish Life management take an interest in you? Was it strictly your sound, or were they impressed with how you were managing yourself and networking your own career?

DJ Pain 1: Basically, I submitted music to them after deciding that I needed to either, as they say, “go hard or go home.” In other words, I wanted to see if I could make production a career and gave myself a year to do it.  I saw the Lavish Life site and saw the artists on their resume (at the time, the only producer signed on was T-Minus) and figured that since they were up and coming and working with up and coming artists (Drake, for example, before the deal) it was a good fit.  Fortunately the feeling was mutual.  Shout out to Brendan and T-Minus!!! 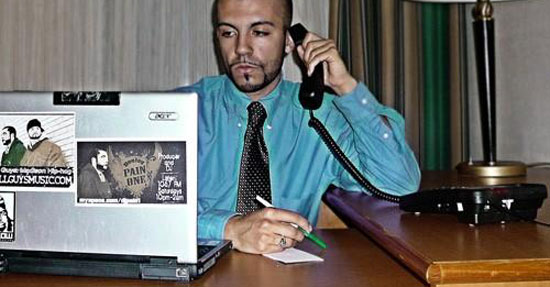 One question I get a lot from new producers is about organization, storage and backup.  How do you keep your operation straight?

DJ Pain 1: It’s hard to be organized, especially when you’re operating under the idea that the more beats you have in peoples’ hands/inboxes, the more opportunities you receive.  The unfortunate part of that model of organization is that every now and then you’ll have a bidding war (which isn’t necessarily negative, as long as there are no promises or contracts being broken) and an incident of beat-jacking.  I had that happen to me earlier this year with the supposed TI dis track, “Round one” by Alfamega.  You just have to keep track of who you’re sending beats too.  Nothing is foolproof though.  As far as storage is concerned, I have backup drives, etc.  It’s rare that hard drives just crash out of nowhere, and probably the best advice I have ever been given was to keep the studio computer an internet virgin.  The internet causes nothing but problems nowadays (it used to be so fun) and if you’re storing beats and session files on your computer, keep it away from the internet.  Malware is serious.

Who are the producers you look up to as business role models?  Are there unsung heroes that most people might not be aware of?

DJ Pain 1: I respect and admire any producers with longevity (and talent of course, but you asked about their business model).  There are certain producers out there who have become brand names.  Many of them own their own labels or entertainment groups and of course, that adds to their longevity.  They have a sound, not just a beat, that people want.  I don’t necessarily need to list them all, since we’re all familiar with the Timbalands, the Polows, the Premiers and so forth, but it’s important to look at what they’re doing beyond making beats and staying current and versatile and overseeing albums— that extra stuff is necessary.

What’s your take on the future of hip hop as a business? Do you feel like the industry is set up for producers to succeed and thrive?

DJ Pain 1: The business is only set up to provide longevity to that which makes profit.  Right now the business is more favorable to producers than rappers, generally speaking.  Artists nowadays, especially new artists, aren’t marketed; their singles are.  No longer do fans feel connected to the artists themselves, they just want the ring tones when they’re hot and both the fans and the labels toss the artists out once their buzz is gone.  It’s bad for the artists and the fans and somewhat ironically the industry— look at current hip-hop album sales!  The only artists who sell albums are the Jay-Z’s and Lil Wayne’s because they’ve been around for so long, we are familiar with them and we associate them as people with their products.  That being said, since producers don’t have the pressure of being public figures, as long as we’re making current sounding beats, we have a good chance of survival.  Even if an artists for whom we produce flops miserably, we can just move on to the next one.  But of course, as album sales decrease and consequently, budgets decrease as well, we end up with far fewer opportunities, smaller checks and more or a push to produce more “singles,” whatever that means.

What’s the biggest change you’d like to see in the music business in 2010?

DJ Pain 1: I would like to see the pettiness decrease.  I’m shocked to see how artists who have nothing end up getting exploited by people in these high positions.  It’s not even necessary.  A few thousand dollars is nothing to these guys at the top, but I’ve seen them fight these up-and-comers for crumbs.  I guess some people think that the business should still be elite.  There are plenty of approachable and fair, honest people in the industry as well, and I’m lucky to know many of them, but there’s negativity and greed in any business.  The bottom line is the bottom line.  Of course, changing that mentality is one of those discussions that go WAAAY beyond a discussion of just the music industry.

You can find DJ Pain 1 on Twitter and Myspace, but more importantly, he’s on the cover of 608 Magazine-a very cool upstart publication about the Wisconsin scene. They’ve got a lot more background about his life story and his local hustle. Check out his feature article here: DJ Pain 1