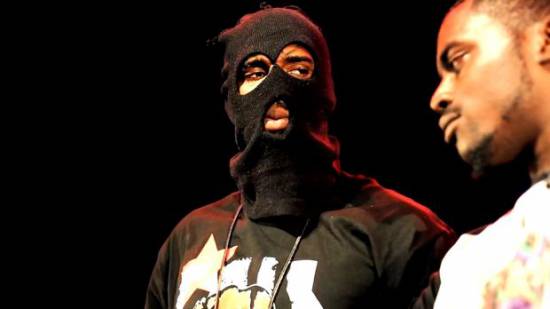 In the course of re-booting Audible Hype, I’ve been asking everyone I know what they want to read about. It’s been an encouraging experiment: finally, nobody wants to know “How to Get Signed.” The most common question, by far, went a little something like “How can I make money playing shows?”

Well, there’s a lot of strategic and business details involved there, but let’s address the most important part first: you need to play really, really good shows. Rather than waste your time with my idiot advice, I’ve enlisted assistance from three seasoned professionals: Blueprint, Curly Castro and PremRock. This is science, dig it.

Blueprint: “Hours and hours of practice at your craft.”

Audible Hype: As you were developing your stage show, were you more influenced by observing other artists, or did you have access to actual mentors?

Blueprint: I would credit my improved show with both observing and having mentors. I started out touring with Atmosphere back in 2002, and that situation was what I like to refer to as my apprenticeship. I was Slug’s hypeman, but he let me perform four solo songs during his set. We also had a few routines we did together that we made up specifically for the live show. The fact that I was able to watch and study how he put his sets together was invaluable because he was touring before almost anybody else and was ahead of the game. And being able to go on the road to perform with him gave me a lot of ideas about how I would put my thing together whenever I took the leap. From 2002-2005 is when I started applying everything I learned to the Soul Position shows and my own solo shows. I went through a period of observation again around 2005-2008. Around then, I stopped going to rap shows as much and started going to rock shows to study the nuances of their performances. I learned a lot about performing from that scene as well.

AH: On your Respect the Architect tour, your stated goal was taking your act to places most tours never go. How did smaller audiences affect your sets? Did you find yourself making changes on the road at the beginning?

Blueprint: Smaller audiences have an impact on what I perform as well as how long I perform. I find that I’m more aware of time when I’m in front of a smaller audience because it’s immediately clear when something doesn’t work. In larger crowds, sometimes the energy of the room will trick you into thinking something worked or will work every night, but the small rooms don’t lie. You have to keep your show engaging and to the point. So there are times when I can play in front of a small crowd and perform for 45 minutes and other times when I will play almost two hours. But the time that I play is always dictated by what I think the small crowd specifically needs, and that’s based on the energy and responses I see in them.

AH: What are the most common mistakes you seen young whippersnappers making onstage in 2014?

Blueprint: The most common mistake I see younger artists make is lack of preparation. Most of them think a show is just a chance to get on stage and rap — but a show is actually an opportunity to win people over and build a career. Anybody can get on stage, but not everybody can put on a show. Showmanship is what separates the pros from the amateurs. And you can only achieve great showmanship through repetition. Hours and hours of practice at your craft. You have to practice your stage show to the point where it becomes instinct and you’re not even thinking about it any more. You don’t think about the words to the song and you don’t think about your movements; instinct kicks in and you lose yourself in it. That’s the point you have to get to before people say stuff like, “he was so natural up there,” because being natural is a result of not thinking about what you’re doing and just doing it. That can only happen if you rehearse a lot. 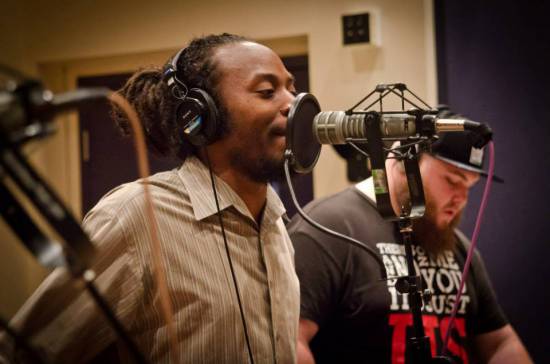 AH: Have you ever used video / audio recordings to do post-game analysis and critically assess your work onstage?

Curly Castro: Yes, very much so. Video of live rap shows normally get lost in the boom bap Bermuda Triangle. So when you are able to get your hands on footage, it’s a master move. You have to be able to take critique if ever you want to advance. And what better a humbling experience than self-critique? It a vital process towards mastery.

AH: What is the most surprising lesson you’ve learned about getting and holding the attention of a crowd?

Curly Castro: The rejuvenation of it all. When you can get a crowd to rock with you, it recharges your batteries. It can salvage a crumbling show. I’ve had instances where the show was falling apart around us like Chinua Achebe, and a spontaneous freestyle by self, along with a reconnection with the disenchanted crowd, rescued what could and should have been a disaster. The crowd is there to be entertained and engaged. They beckon. And when you answer and excite, the symbiosis is powerful. Sometimes a crowd that has bought-in can carry you to the finish line. And when on normal long tour runs…you’re gonna need it.

AH: Do you have any essential pre-performance rituals you’re willing to divulge?

Curly Castro: Smoke. Nyabingi. Smoke some moor. Nah…I usually do smoke some Medicinals. Meditate. Then visualize. Moor often than not, I will run a full accapella version of my set, whilst smoking. Ha ha. I’m a creature of habit.

Oh, and: Hydrate. Water is life. Water is important. Missiles don’t blast off without fuel.

AH: What are the most important ingredients for running a rap show that does not suck?

PremRock: I would say there’s definitely a few major ingredients in every show I try to put together. First is the lineup. Put together a lineup that make sense and will flow well enough to not be jarring to listeners who aren’t familiar with every act on the bill. Also, make sure they have a draw. Honestly, I don’t care if they bring friends who only like their music because they went to college together, that is money at the door and helps us continue to do these shows. Only book artists who actively promote and don’t do 10 shows a month. Rocking 10 shows in the same city a month is not hustling and it lessens the chances of you getting a unique opportunity.

Make sure you stay in touch with everyone on the bill and they know how to reach you, if you are the one organizing the event. Be VERY UPFRONT about money. I’ve seen disasters go down, as you can imagine. When an act is popular they can request a guarantee, and it’s up to you to decide if that is worth “Guaranteeing.” The word means just that: they will get this money, rain sleet, hail, snow. In most cases, the performers pay is based on attendance which makes perfect sense, make sure the artists know if they don’t bring anyone, they don’t get anything. The last thing you want is a midnight argument with someone who thinks they are owed more than they are. How do you get paid if no one knows you? That’s another hustle and article altogether but I wouldn’t book you.

Do all the regular Twitter and Facebook posts and make an email blast as well, so people can’t bitch about “not knowing about it.”

GET A HOST! I usually host my own events because I know I’ll keep the night moving, I won’t put on unannounced shitty friends of mine who can’t rap which is mostly due to the fact all my friends are good at rap but still…have some respect for your audience’s time.

Start at a reasonable hour and stick to the time you said you would start. The worst thing I hear when something goes wrong or when a show runs hours late is “Well, that’s a hip-hop show for ya.” No, fuck that. Change it. Why do you consistently want to be associated with unprofessionalism? Because you aren’t professional, most likely. Don’t ruin it for the rest of us. If your show is on a Thursday start at 8:30 and shut it down by midnight. If it’s a weekend show, start it later but don’t say 10 and start at midnight.

AH: What kind of warning signs have you learned to watch out for, in terms of venues and promoters?

PremRock: I’ve learned that most promoters are shady and total flakes or they despise hip-hop. But one thing no one can front on is money. If you run a tight night and bring in the people/drinkers without incident, you cannot be denied. In a perfect world, a promoter does his/her job and gets the people, sound/doorman sets up some sort of incentive to get unique folks in the door. This world is far from perfect. Assume the promoter is simply a connected person within the venue who holds the keys and your fate in their hands, nothing more. This means the “promo” aspect of the show will have to be done by… guess who? YOU.

AH: What advice do you have for new artists just waking up to how terrible they are live?

PremRock: Haha.. Well I would say, practice, learn ALL of your lyrics and rehearse them until you can do anything else while you are reciting them. I know if I can read something while rapping then those lyrics are in there for good and I’m ready. Stop rapping over your vocals maybe? If you are truly trying to make this a career or partly a career, or have respect for yourself, study the greats. Study the best performers out there and get as good and comfortable as possible.

Follow these rules and you’ll have mad bread to break up… I kid, but who knows? You might be able to run a nice show where everyone feels good leaving, everyone has a bit of dough and you get the chance to do it again.