Blame One on Endurance and Balance

“I am a pretty nice guy but I will kick you in the shins if needed.” As music industry bios go, Blame One has one of my favorites. He’s also responsible for one of the most slept-on classic albums of recent years, Days Chasing Days

. I got a chance to talk shop with him about balancing hip hop and a family life, staking out a long-term career, and how the Internets have changed just about everything.

AH: You’ve got a real knack for putting albums together. Have you ever considered doing A&R work for other artists?

Blame One: Thank you. One of the things I’m working on is releasing several artists on my own imprint “Polish Pub Records” The first artist that I will focus on is an emcee named “Big Left” formerly of La Coka Nostra. He is mad talented.

AH: How much does your day job in advertising inform your DIY promotion work?

Blame One: My day job plays no part at all in how I approach music promotion. Two completely different worlds, as I work entirely with television campaigns at my day job. Ads that I could never afford..ha ha. I have just done everything grassroots like most other artists but for a long time, so it’s built up over the years.

The booking agents name is Blame One. However, if I chose to do an extensive tour, I have the means to do so through my team which is The Dirty Science.

Side Note: The Dirty Science?

Not quite a record label, more than a website, stranger than a mere management company, The Dirty Science is a template worth checking out. Centered around the work of Los Angles producer Exile and hyperactive everything entrepreneur Jonathan Kim, The Dirty Science is a great example of how unofficial support networks can become brands of their own. Even if you’ve never heard of The Dirty Science, you’re familiar with their work: Blu & Exile’s debut Below the Heavens

was their first big (and classic) successful project, and more recently they’ve worked with Stones Throw to launch Aloe Blacc onto the global stage.

Back in 2007, when illRoots asked Blu “What steps did you take to get this album out?” he simply responded: “Jon Kim.” His reputation is that serious, and he stays insanely busy. I’m working on a case study article on the Exile/Kim operation, though, so more on them next week.

Back to the interview…

AH: Do you think the last 5 years have made life easier or harder for independent artists?

Blame One: I’m just gonna speak for myself on this one. It’s made my music easier to market, but harder on my pockets from all the bootlegging and free downloading.

AH: Do you think that blog coverage translates into more sales and more people at shows — or just more awareness?

Blame One: I think blogs definitely bring more awareness and a small percent translates into sales. As far as shows, I don’t think the blogs really have an effect on who is showing up. That’s usually an audience getting made aware via twitter, facebook, myspace, etc.

AH: As a family man, do you think it’s possible to break an album in 2010 without going on tour? Is that still necessary today?

Blame One: It’s definitely possible to break the album, but if you wish to take things to the next level, you still have to tour. Tou are always going to gather new fans performing, even if its in a town 50 miles away from you. There is bound to be someone there that has never heard your music that you might impress.

AH: When you’re working on lyrics these days, are you focused on album tracks, or do you still experiment a lot?

Blame One: I’m usually working on projects so I’m focused on bringing something to the table that will coincide with the project. I wouldn’t say that I experiment, but I definitely still try to out-do myself and raise the bar lyrically.

AH: You feel like you’ve accomplished everything you wanted to with your career or are there still many mountains to climb?

Blame One: Honestly, when I set out to try to really have an impact with my music all I really wanted to gain was the respect of my peers and other artists that I admired. Now that I’m achieving those things, I feel like its just a matter of pushing myself to be the best at my craft possible. My next goal would be to help keep the youth in tune with the culture in the way that I found it as a child. pure. With my new album endurance, you will see the start of that. My guest appearances are all young San Diego features for the most part. All dudes with sincere skill and passion for the culture. 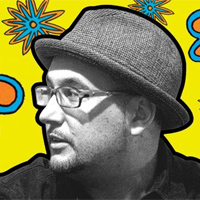 I sent Blame One another round of questions but never got a response. Most of the interviews I do for Audible Hype end like that and I’ve never taken it personally, because real life is one hell of a busy place. I was gathering images for this post when I came across something I never expected: an actual explanation for what had distracted the guy. As reported by the San Diego City Beat, his life got interrupted by something that’s familiar to a lot of Audible Hype readers — abrupt unemployment.

He’s welcomed the change, taking it as an opportunity to pursue music full-time: â€œIt turned out to be a blessing because right now is the perfect time for me. I’m loving it. I’m gonna write eight hours a day. I’m gonna approach it like it’s my job and write like a maniac.”

Amen. Here’s a toast to Blame One, and if 2011 has been nothing but a struggle so far, here’s a toast to you, too. It’s already been another long, cold winter — here’s hoping we can all spark something sustainable this year.

FH: Do you have any advice for cats looking to come up in the game? If you could help a struggling artist avoid any of the mistakes you’ve made, what would it be?

Blame One: Just be yourself, don’t worry about what is hot. If you are gonna make it in this game, you need to devote all of your time and focus on that one energy. If you believe in yourself, nothing can stop you. But don’t come out the box thinking your shit, be humble and let others tell you how good you are. If you got it, you got nothing to prove.