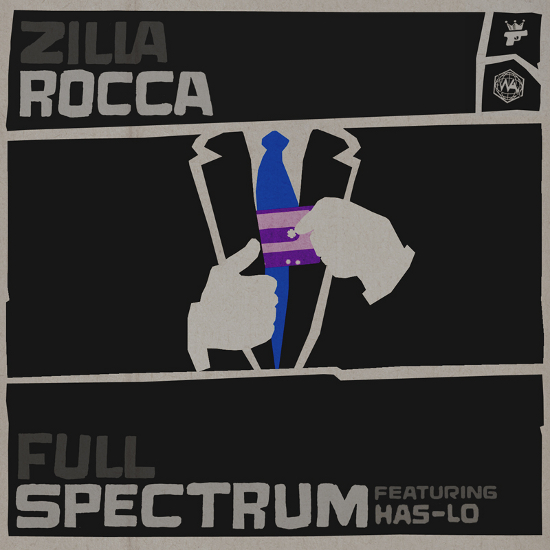 Since Zilla Rocca dropped one of the best articles we’ve run this year, he’s been hard at work on a new project, Nights and Weekends. To kick things off, he’s released a single which features Has-Lo and Zilla trading verses over a Dr. Quandary composition.

Zilla Rocca is also running a Kickstarter campaign to fund the production of the album (at a ridiculous discount) as well as an ambitious video for Full Spectrum that will be shot on Super 8. Check it out:

“Zilla and Has (aka The Wrecking Crew) go all Philly ham sandwich over this moody number from Quandary. Love the guitars, love the visions. Love how Rocca flips a number of lines about “colors”, with Has bringing some vivid poetics on the backend. Love this.” — Rock the Dub

“There’s nothing bland about Zilla Rocca’s rap palette, which is on full display on his new single â€œFull Spectrum.â€ Zilla and Has-Lo flip a three-minute tale full of clever wordplay and imagery from a singular theme…” — So Much Silence

“Dr. Quandary lays down a smooth guitar driven beat, coupled with some of the dustiest drums one will hear in 2011. Together Rocca and Has Lo sound pristine painting pictures with words.” == MembersOnly206

“Charcoal hands. Purple ties and purple tapes. ZR and Has going crayola, a fresh coat for a tired blend. Indirect homage to Ice-T and straightforward pounds to Edan and Elzhi. ” — Passion of the Weiss

What do you folks think? Everything we post on Audible Hype is from artists who value feedback — whether you’re feeling it or not, let us know what you think of the track.