Zilla Rocca was speaking some truth yesterday and I had to republish it here on Audible Hype. Zilla has been through everything we cover here: booking tours, starting labels, record deals, building scenes, artist management, branding and marketing…yup. So think his testimony here is probably the most important stuff I’ll be posting this year. I won’t steal his thunder with a synopsis, I’ll just let him speak…

The Testimony of Zilla Rocca 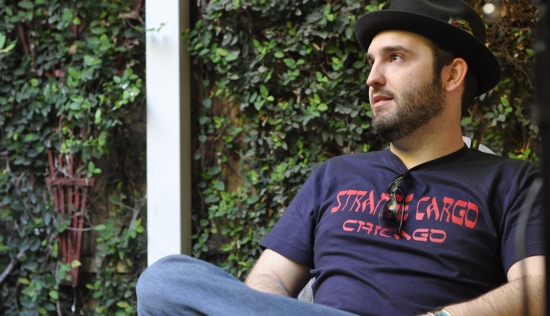 For the first time in about 6 years, I feel just…content and happy with my music “career.” I spent a good portion of ‘06-‘10 worrying about what I WASN’T doing and what needed to be done NEXT. Didn’t enjoy anything in the present. As a DIY artist, I’d read all these articles and stories and interviews which just made me feel like I was behind the curve and unproductive. Now I just focus on making stuff I enjoy ONLY. Eff sales, hits, views, cosigns, placements, etc. The most successful artists still suffer.

It feels good to just create. Artists aren’t supposed to be accountants, PR, webmasters, promoters, etc. We get told that artist X did ALL of these things and they made it. But do those folks even enjoy it anymore or are they punching a clock? I’m OK w/ working a dayjob while moonlighting as an emcee/proudcer. It makes me feel like a superhero.

Artists who are 100% driven to make it often become unbalanced as people, and end up melting down and freaking out anyway. Bill Withers didn’t get on until he was 30 something years old. Watch “Still Bill” …he leads a normal fulfilling life.

So yeah…thanks to all the folks who’ve worked with me or reached out the past year. You’ve helped me love music rather than just “pursue” it.

Here’s a list of rappers who didn’t break through until they were 27 or older: Kanye West, Eminem, 50 Cent, Jay-Z, Yelawolf, Jay Electronica, Curren$y, Danny Brown, Tech N9NE, or arguably some of the best in the business right now. The old saying is that “rap is a young man’s game”. Bullshit. There are no great rappers under 28 right now. Guys like Rakim, Nas, and the Wu getting on at 16, 18, 20 years old—that’s never going to happen again. They are geniuses, which means they were more advanced than anyone. It was a different world, rap was younger, etc. They were always going to land on their feet. In all likelihood, you are not going to get on while you are “young”. Don’t feel like it’s time to hang it up because you have student loans, a 401K, and an overdue cable bill. Like any other craft, you get better with rap the more time you put into it. Writers get better with age, as do musicians. The only older folks who fall off are the ones who don’t accept change or stay frozen in time. Bun B literally has grandchildren and is on every new album that comes out. Don’t treat adulthood like it’s hip hop poison.

For every Plan of Success you read about it, there’s another article that dispels it. “Start a Reverbnation Page” “Studies Show Fans Hate Reverbnation”. “Sign a 360 Deal” “All Artists Regret Signing 360 Deals”. “Put all of your money into merch” “Recession has hit the music industry the hardest”. Whatever you want to do, just make sure you MAXIMIZE your strategy. You’ll be discouraged the more think tank pieces you read because those are written by people who are doing THEIR strategy to the fullest. Good for them. Lady Gaga purposely saturates all media to be successful. Adele takes the exact opposite approach; she hates oversaturation. Her album is #1 all over the world. Whatever marketing or promo pitch you come up with, stick to it and push it fully. If you like Facebook over twitter, direct everyone to your FB fan page. Forget Twitter. If you hate FB and love pics of nude indie girls, direct everyone to your Tumblr. Forget Facebook. You like email blasts, forget blogging. Be disciplined — that’s the hardest part. The old sales proverb is that a sale isn’t made on the 1st call; it’s made on the 8th or 9th call. I used to do cold calls and that shit is true. Whatever your plan is, it will take time. But if you invest in that 1 idea and stay disciplined to it, it will pay off.

3. Don’t Get Caught Up in the Numbers

This is really hard because the internet attaches numbers to everything, as if that solely determines real world value. There are rappers with 1,000 YouTube views who are signed to a major right now. There are rappers with 50,000 YouTube views who will never get signed. There are guys selling out CDs, vinyls, and t-shirts who you’ve never heard of. There are blog rappers that saturate the internet with videos, cosigns, and mixtapes and can’t perform for more than 10 minutes live. It’s all an illusion. The best stuff has almost never sold the most. Don’t assign value to the hits, views, friends, followers, etc. Assign value to your work, then others will do the same. If you present garbage and gimmicks, what do you think is coming back?

4. The Company You Keep is Everything

If you’re an artsy daydreamer, be around other artsy daydreamers. If you love the radio and money, be around rich fools who love Hot 97. There’s nothing wrong with either group. But there’s a reason why Anticon doesn’t exist to Lyor Cohen. Anticon’s motive is to put out progressive weirdo next level shit. Lyor Cohen’s motive is to own 3 summer houses (read the Big Payback for more on Lyor; he’s a ruthless titan). A guy running a strip club probably wouldn’t partner on a new venture with someone running a AIDS awareness non-profit. Their motives and philosophies just clash. Don’t waste your time with people whose motives clash with yours. Be cordial and polite, but don’t be fooled. You are not alike and you probably never will be alike. By spending time around likeminded people who are inspired and motivated by the same things as you, the stress and workload lessens. You speak the same language. This is important.

5. Don’t Define Yourself Solely Through Music

Take a trip. Go see a movie. Date a librarian. Watch sports. Become a wine afficianado. Volunteer somehwere. Do something besides “living in the studio”, “making beats for days”, and “grinding out here EVERYDAY!”. For a long time, rappers and producers weren’t hustlers. They just worked when it was time to work and their music reflected their influences outside of music: religion, philosophy, social issues, racial strife, films, etc. This is a relatively new honor badge that folks proudly display, the 24/7 Grind Master. And the folks who “grind the most” make the least interesting shit because they aren’t experiecing anything outside of the hustle.

I’m not saying don’t work hard, I’m saying balance out your life. Hip hop isn’t EVERYTHING. You aren’t “being hip hop” when you spend time with your sick grandmother or reading a book about Gandhi or sitting on a parkbench watching kids run around. You’re just being a person. There’s other parts to your identity besides two turntables and a mic. Like Mos Def said, hip hop will do whatever you say it can do but it won’t save you. If you’re an egotist with commitment issues, putting out 3 EPs and performing for 6 months straight isn’t going to fix that. You’ll be an even bigger egotist with commitment issues because you spent 6 months in a distraction.

You’re not losing out on your career if you take a breather; you’re extending it. We’re all fighting for relevancy and attention, but sacrificing your homelife and your real life relationships for 7 extra blog posts or 2 more shows or 10 more CD’s sold doesn’t fill that void. It widens the void, so once you do achieve your goal, after 3 months, you start thinking “Damn…so….what’s next?” You can’t even enjoy the milestone because you’re so used to working towards the NEXT thing instead of relishing in what’s happening RIGHT NOW. If you think a big tour and a record deal is going to make you happy, you’re wrong. Because once the tour is over and your deal falls through, you’re back to where you were. It’s a passing satisfaction. It’s not a lasting satisfaction.

So please, if you forget everything I’ve written thus far, just remember that being a whiny selfish douchebag might land you a couple big singles, but your life, and the lives of those around you, will be affected by that poisonous attitude long after your last mic check. Working on yourself as a person is more important than working on your freestyle or your loop chops. You’ll be just “a person” a lot longer than you will be an acclaimed hip hop artist. And that comes from stability, self-awareness, self-reflection, a balanced lifestyle and wise decisions. Something that is imbalanced always falls over, the same way ice cream is great but if you eat ice cream for three meals a day, you get sick. There will always be another show, another album, another video. There’s only one you. Which is more important?