Kosha Dillz, as you already know, never actually stops moving. Right now he’s on tour and still managed to hit me up with another article for Audible Hype. If you missed his last one, check out “Help Yourself By Helping Others.” Today, he’s got more hard-won experience and motivational advice for you…

So…I’m thinking of ways we can all continue on our DIY success. Last time we chatted we spoke about helping others, to help ourselves.

I just booked a 30 city tour because no one is trying to do it for me (yet) and one thing I realized that no one else has what I have for MY music and my career…and that’s DETERMINATION.

Personally, I am determined to succeed and hit the road to spread my music. I shall find a way by all means to do what is necessary for that. I follow in the foot steps of great acts like Atmosphere, Matisyahu and more. My friend Lonnie tells me how he bought a tape off Slug about ten years ago for $5 in Indianapolis. That determination inspires me. Look where they are now. I’ve been touring hard for three/four years. Matisyahu used to tour before he blew up and play mid-sized venues like Grog Shop in Cleveland and Castaway’s in Ithaca. I’m playing both of those venues on my “Give Me Five” tour.

Along your journey to entrepreneurial domination in your DIY musical venture (death to the corporation), take heed to the ones who have the desire to succeed and are taking action. These people have determination. Imagine this. Bands back in the day had no MapQuest. They sure as hell did not have a GPS. They had an agent call up venues and send letters and if no one was there they had to wait. There were no emails. Press kits? Ha.

Determination is necessary to help you achieve goals. It’s the drive behind the force, the break down, the re-start, and the go again. Sure you write great lyrics. Do you have a good youtube channel? Do you engage with your community too? The fact is, plenty of people write great lyrics, do great shows, play over 100 shows annually and tour the world. What else are you doing for your career? What are you doing to be in tip top shape?

Mr. Olympia contenders lift twice a day every day. Marathon runners don’t just show up and run 26.21875 miles. They practice. They eat right. They sleep right. Musicians need to do this too. (…do i have to? Yes, you do have to.)

A true DIY warrior knows that success won’t make you feel better inside. It’s good for the moment, but its never really good enough. I have gotten all this success this year and I still don’t feel like enough people showed up at my shows. I think I suck on occasion. I don’t actually suck. People still don’t get it after I crush it. Its OK though. No doesn’t mean “no, i wont go to your show.” No just means I wont go now. I might go later! “No” doesn’t mean we’ll never book you, just that we just wont book you today.

“Maybe we’ll represent you later. Keep grinding. Keep at it,” is what they say. Smile and try not to attack the person who doesn’t call back.

If you stick around long enough in the music business there a few things that’ll happen.

After number eight, (that can be in three months, years, or even longer), you will learn that it’s not really personal. The fact is it all comes full circle because that is the shape of this world, and its up to you and your DETERMINATION to see where you land within it. For me, I figure that if I have come from jails to almost dying to hustling to doing music to…wanting to quit…now, that’s just ridiculous.

Here is a conversation in my head.

Parentheses is my determination voice and the other is my “acting like a wuss and feeling sorry for myself and being lazy” voice…we all have one.

5 hours later you have 27 new emails, met some people who knew you, and made $68 in merch sales just by attending a show, and a slew of new pictures for your website.

I don’t take it personal. You can’t.

I already know how it goes. I also know that these people might want to book me now that did not before. Some people believe in you long before the others do. In DIY spirit, it’s something we have to deal with because not everyone knows yet. But please, DO NOT QUIT before the miracle happens! The next hand of cards you play could be the beginning of your winning streak.

When speaking to Aesop Rock on tour, I asked him what I needed to do to start packing out shows. His answer was simple: “a lot of shitty shows.” That’s DETERMINATION.

When speaking to Sav Killz about his mix tape “Determination Through Time” in 2006 to his new 2011 EP “Still Determined” and why he uses the word “determination” in his album titles, he tells me that the word is part of his personality and the root of his love for it all. All meanings: “The music, the elements, the hustle.” Once he met with DJ J Ronin they realized that they don’t need to wait around for anyone else to give them a go, an OK , or a co-sign to put out the music that has been sitting in the vault.

“Most people want to quit when they find out that you gotta get up, check emails, twitter, go to the streets, sell CDs, deal with rejection, then hit shows, network, eat food late, then hit the studio,” Sav said. “The rejection builds character. Rejection makes you more determined. Every no means you’re getting close to a yes.”

When speaking to MC Pigpen and Pat Maine about why they headed to SXSW in a 20 hour ride from Salt Lake City, Utah they said “you are supposed to be doing this.” DETERMINATION.

When speaking to a college football coach on his walk-on, he mentions how he never thought he would be the one to make it past the first week of practice. Now he is headed to the NFL. DETERMINATION.

As for myself? A MC called me up that I did show with for$50 bucks last time I was in his town…well, now that’s turned into $900, which is my biggest club guarantee yet! DETERMINATION.

So will I quit now? Lets be real. I can’t quit. Neither can you! Once we get a taste of this D.I.Y. spirit, we gotta keep going. Determination has nothing to do with talent. I tell you this: when people see the D.I.Y. warrior pursuing their dreams and working on the path…there’s four things they will do:

There can always be a combo of these four.

Just make sure you do the first two (support, help) for yourself most importantly, for others along the way. 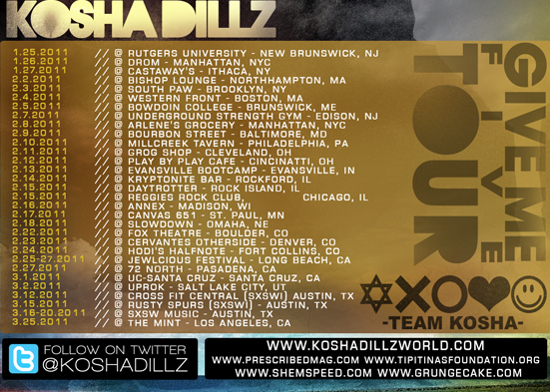