Kosha Dillz: Help Yourself by Helping Others

It’s 7 in the morning, and Kosha Dillz has already put several hours into his music career. That sentence is true pretty much every day of the year, and stories of Kosha Dillz driving 700 miles for one gig or playing 6 shows in one day have become underground legends. Today’s he got a guest post for Audible Hype about Reciprocity — the foundation for any successful career…

Help Yourself by Helping Others 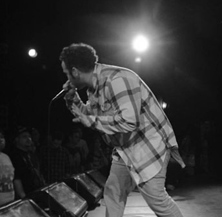 Sure it’s a crazy concept. You’re trying to book your own shows 24 hours a day. You wake up, shower, drink coffee, open up that lab top , and Facebook like it’s your job. (is Facebook hiring?) It’s really not. You spend most of the day “liking” your own music on youtube to sync in with your 4000 friends and by the end of the week, you have once again promoted yourself to people all so much.

You’re trying to blow up. You are trying to grind. Your rap group and band deserve to win because you are the best and you are deep and your lyrics are meaningful.

Ask yourself this…what have i done to help another band out today? (silence…)

On my first tour in 2008, the Spare Change tour, I routed across the entire U.S.A all by myself and was primarily helped by other musicians. They let me stay at their house, eat food out their fridge, do my laundry, and pay me sometimes out their own pocket for the love of my music. My music? Wow. I thought I sucked and only started to be successful so recently. After all that, they even wouldn’t let me give them my tee-shirts for free. They insisted on paying for them.

Other times there wasn’t much to go around and I might have need to sleep in my car in a gas station. I remember calling up Killah Priest and asked him what to do, and he told me to leave the car running at the gas station ( it was dead winter). I thought I’d die from smoke inhalation, but I remember that can only happen if I am in a garage. I woke up freezing and also a new man, for it was the first time I volunteered to sleep in my vehicle. Not only that, but it was the first time I was getting some really cool and personal advice about a shitty situation and I appreciated it. Obviously I sleep with the car running now if it goes down because I want to stay heated in Boise Idaho during the winter.

Does that sound like you want to have that? It’s not a bad story.

The fact is that we are so concerned with what it is for us, it can always be a lot worse. Self centered egotistical musicians, which is about 99 out of 100 of us, have issues with entitlement. Imagine me speaking to Killah Priest who has kept a successful underground career based on the notion of being cool and helping others out along the way after selling over 400,000 albums at one point and being on over 1,000,000 albums sold.

Whether it’s giving experience or friendly supportive calls to musicians you know, telling your people to come see other bands on tour, or going to random bands shows you find in the local paper (even if you are a rapper/MC) just to drop some gas money in their bucket and buy their CD, the attitude of gratitude to be in this D.I.Y arena will help you survive within yourself. What does that mean?

Fact is people help you out for the sake of helping out. We are all living the dream. They might not even like the music but might find someone who will, and they want to support, all of us.

After you read this, please repost someone’s video they have been pushing on your twitter page. Pass off a business deal to a friend. Help link fellow musicians that need gigs or places to stay. BUY someone’s CD at a show and go to the front of the stage and support so you can see the others behind you.

3 guarantees come along with this…

Please note that I do not guarantee anything else (fame, riches, more shows, more merch sales) although that might come along with helping other bands that will do the same for you. As you finish this article, please ask yourself this again.

Let’s change what’s in those parentheses.