Please forgive me as I am a week late with this, but the fact that the disgust has lingered long enough for me to still want to write about this is a testament to how weak the idea was. (Edit: I just saw that he is doing this again tonight so I guess I’m still on time.)

For those that are unaware, Lupe posted a rather ambiguous (read: misleading) tweet on February 3rd that was a Call to Action for his NYC fans. I’ll let him show you in his own words:

Granted this could mean anything, but being that Lupe just recently rallied his supporters to march across NYC and convince Atlantic Records to release â€œLasersâ€ from purgatory (catch up here) it’s fair to say the fans expected something more. Musicians oftentimes use ambiguous tweets such as these to clue people in to secret shows or secret giveaways. What Lupe was gave us was far short of that.

I wasn’t there but here’s a firsthand account of what took place and fan reaction:

“At 7 pm, fans began to â€œlook up in the skyâ€ as Lupe told them to â€” but there was nothing to be seen. Ten minutes went by as fans started to fake Lupe sightings in the crowd. Then an ambulance pulled up to the curb and chaos erupted. Some fans thought Lupe was inside the ambulance and began to charge towards it. People slipped on the icy Union Square steps. Lupe then tweeted again…”

“All the fans left the ambulance and moved into the streets. Cars were blocked off immediately and another ambulance was temporarily unable to get through. On the side of the building that DSW Warehouse is in, an image was projected onto the building. It was Lupe’s Twitter icon, a QR code.”

“The QR Code flashed and played previews for what looked like a music video â€” with no sound. People began to walk away very quickly to say the least.”

“This event is an example of extreme marketing of the worst kind, purely promotional with no benefit to the artist’s fans. Just earlier that day, Lupe had released the tracklist to the album. Why couldn’t he have waited and projected that onto a Union Square wall? There was no real point in holding this event at all. Lupe probably pissed off more fans than he won over that night. As someone who walked away screamed: â€œI’m downloading this album for free. This was bullshit.” 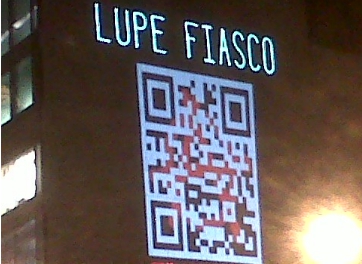 Can we all agree that this is a failure? Well that’s fine if you and I can’t because it seems that at least Lupe has learned his lesson: 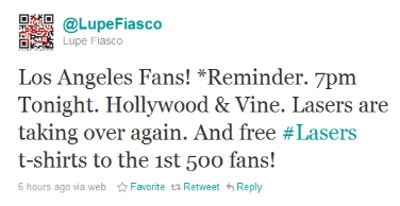 However, that’s just the back story; the much bigger issue here is that the whole idea is an expensive exercise in futility. The QR just takes you to a link to pre-order â€œLasersâ€ with extras for $50. Really, Lupe? You activated your loyal supporters to come out during one of the harshest winters in recent memory to jump through hoops to look at some pictures and then over-pay for your album?! Seriously, fire your marketing agency immediately (lucky for them I can’t remember the name). You could have accomplished the same thing with a better ROI using your media buy on Facebook ads that pointed to a landing page with the very same thing.

The case could be made that then I wouldn’t be writing this right now.

I get that, but at what cost? I assure you Lupe Fiasco fans will think twice now before considering leaving the comfort of their homes when he issues his next calls to action. Most of the coverage about this is negative and given the response I’m positive they would have gotten a better ROI buying a Myspace ad. Yes, I just said Myspace in 2011. Yes, no one uses that. Yes, that is my point. This was a grandiose exercise in futility.

I have a much better idea but let me first familiarize you with the concept of a â€œdead drop.â€

In short, there is a German guy who started cutting holes in walls and placing USB flash drives in them and sealing them back up for use as an offline peer-to-peer file sharing network. Applying this to Lupe, he should have released a mixtape or some sort of exclusive release in conjunction with the announcement of the pre-order of his album and then placed dead drops in various places in various cities. Each city would get one song and some other piece of multimedia content, perhaps a video or something with instructions to visit a portal on Lupe’s site that you would not otherwise know how to reach. Users would then have to talk amongst each themselves across some sort of social network on Lupe’s site and share the songs. Lupe’s site is where the pre-ordering should occur, not while dodging ambulances in Union Square.

Now the QR code would have been great to use in conjunction with this idea. It would have acted as a bat signal and it should have changed to a different code every 10 seconds that would have shown you a different location in Red Laser (to spread out the volume of people). Every location would be a dead drop with Lupe Fiasco â€œLasersâ€ branding as a graffiti stencil on the wall to let you know you had arrived. However they could have skipped the expensive ad altogether and Lupe could have just tweeted locations and clues and accomplished the very same thing.

My idea is very involved but the benefits include qualified site traffic, email addresses/facebook/twitter info for the mailing list and sharing of via social network signup, extensive chatter across other networks/cities/states/countries as people traded the songs to get the complete set. Fans would also feel more inclined to pre-order the new album since Lupe did something really cool and gave them something in return. Secondary benefits would have been the extensive positive coverage this would have gotten on not just hiphop blogs but tech and marketing blogs as well.

Lupe Fiasco could have changed the game; instead he gave us a really expensive and boring light show that will forever be known amongst would-be bloggers and marketers as The Lupe Fiasco.

I have plenty more great ideas where that came from. Lupe, please feel free to email me, let’s talk about making your album campaign work: mike@ipullrank.com. Everyone else, follow me on Twitter - @iPullRank

Mic K!ng is more than just the best rapper ever and a purveyor of pure party Cool-Aide — he’s also a serious SEO professional and a veteran coder. If you’ve questions about your business, check him out on LinkedIn and Twitter.