How Independent Rappers Get Booked for Shows

The problem with rapping for like 50 years straight is how much you wind up taking for granted. This summer I’ve been getting emails from people asking me to book them shows, which is sad and adorable, but it indicates a basic problem. I can’t be the only person getting these emails. If this isn’t being clearly spelled out somewhere, let’s do that here today.

1. Independent Rappers Book Their Own Shows

At least, they have to start that way, so let’s start there. If you know where you want to play shows, step to those venues directly. They’re generally easy to contact, since they are doing business in the real world. I get emails from artists asking “what they should expect” from venue management, and that is ass backwards: you need to know what venue management expects from you.

Here’s what you can expect from venue management: they will make their decision more or less instantly, in terms of whether or not you are worth their time. You can expect that contacting them again if/when you don’t hear from them will get you exactly nowhere. You can expect that most of what they tell you will turn out to be less than true. Honest smart management certainly exists, but the species is not common in the wild.

“Struggle” is a very relative thing, innit? Rappers will generally congratulate themselves for any degree of hardship whatsoever, even when they’re dealing with the burden of having to show up to the studio on time, or attend their own shows. If you’re about to start doing gigs, plan for a year or two of continuous frustration with occasional glimpses of Awesome. Struggle is a process.

With that in mind, let’s take a look at your options as an independent rapper trying to blow the fuck up already:

1. Table Scraps - if you’re actually good at rapping, you can leverage the charity of strangers into something resembling a local following. Venues always need to keep costs down, and they always need to pad the bill — fill out time in an evening of music. If you’re willing to be the opening act for free, or token gestures like drink tickets and being able to lounge “backstage,” then you will eventually get a gig. If you proceed to deliver a quality, entertaining show that resonates with the strangers in the room, I can pretty much guarantee you will be asked to return.

2. Pay to play - the most common system, out here amongst the herd, is for local acts to buy opening slots, sometimes through outright cash payments, but more frequently through the ritual humiliation of having to “buy tickets” to resell to your friends and family. This is generally retarded, but occasionally, a smart move. For instance, if you have the opportunity to open for someone with a similar sound — and a potentially overlapping audience — and you’ve got merch to sell, then paying $200 to the promoter might resemble an investment, rather than a cheap swindle.

3. Venue rental - Here’s your best best: set up your own cheap swindle. Not everyone reading this is broke, after all, many of you are fairly affluent, just very dumb. You can rent venues outright for a flat fee — and it’s less than you think — and put on your own show. Can’t afford a good headliner? Have other local artists pay for that for you…by selling them opening slots. If you can afford this, you know, do it. 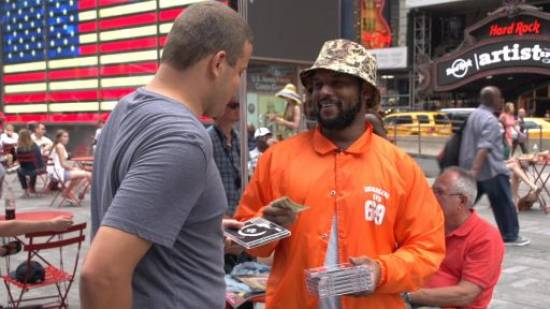 If that sounds like “work,” you’re right. The more work you can take off the venues hands, the more likely they are to book you again.

More importantly: if you’re thinking “This dude is telling me I need to lose money to do shows?” … damn right, buddy. That is exactly what I’m telling you: expect losses while you’re investing in yourself and your future. You’re not going to see ROI for a long time. If you cook really damn good food, that doesn’t mean starting a restaurant is going to cost you any less.

If that seems outrageous or unacceptable to you, well: good. I don’t want any of you mogs competing with me. This rap shit is crowded enough already.

And remember: Nobody is Going to “Put You On”