Sorry things have been slow here — I’m on the road and I released a new album, so I’ve been falling behind here at Audible Hype. I figured the best way to get things moving again would be a full report on the process and the results behind my latest project, No Humans Allowed. 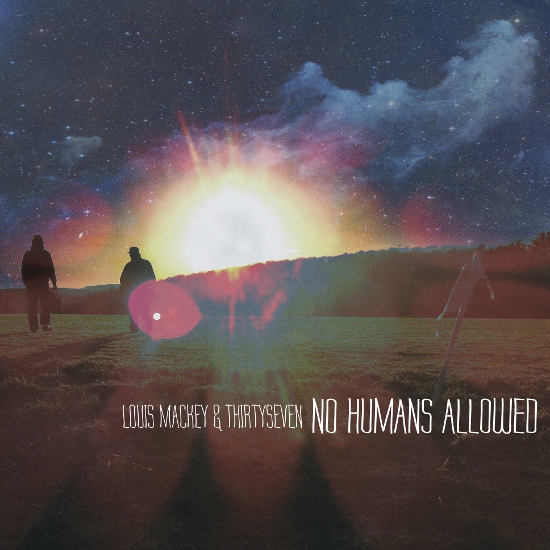 In my constantly-changing day job, I am a freelance copy/ghostwriter so I’ve been collaborating using Google Docs for about three years now. No Humans Allowed is the first time I’ve used Google Docs to create an album, though. I was in Illinois and Louis Mackey was in Boston, but this allowed us to put in work on the project every day.

I firmly believe it’s important to look at lyrics on paper and judge content instead of delivery and performance. Being able to see our album and edit harshly gave us a stronger product. Without question, Google Docs sped up our creation time. From concept to completion, NHA took just under 6 months. Which is awesome.

No Humans Allowed was almost entirely funded by Louis Mackey’s tax returns. Lou purchased an insanely nice Neumann microphone and a Focusrite preamp…although the mic booth was basically a curtain and an inflatable matress, the results were gorgeous. We booked tickets three weeks in advance for a working vacation we came to call Pax Bostonia.

The director for this expedition was definitely Nick Williams, aka Custom, who showed up with schedules, video treatments and a burning desire to Get Shit Done. It was Custom who set up the equipment, ran the sessions, and later mixed and mastered the album. During the course of Pax Bostonia, we also shot just under 10 music videos and recorded a half dozen cuts for other projects. (My biggest regret of 2011 so far is not having more material booth ready. I could have gotten 2 other projects done if I’d pushed harder.)

We did several photoshoots for No Humans Allowed while we were in Boston, but the cover art turned out to be a happy accident. We spent the week in Boston shooting and recording, then headed out to Bennington, Vermont for an even more intensely stacked weekend of shooting. (Me and custom were up at 5 am on Sunday morning and then spent the next 2 hours outside in sub-freezing temperatures…that sort of thing.) Most of the videos were for other projects, but I mention all this because the cover shot was a random pic that Dr. Quandary took while we were scouting locations and plotting logistics on Saturday night.

Our goals on design were based around a straightforward template — we needed a high-res cover, two banner versions (one for bandcamp, the other for blog submissions) and several extra group shots for post-release promotion and booking shows. Dr. Quandary delivered across the board, like he always does.

No Humans Allowed was the first project of my entire career that made the deadline. Of course, that never would have happened without my extensive previous experience with professional-grade failure. Having seen everything go wrong on a half-dozen projects, I finally had a clear roadmap of release process. That said, we just barely made the deadline, and that was thanks to last-minute hustle from Custom, who rendered the final mastered .wav files and uploaded them to Bandcamp in the hours leading up to May 5th, 2011. I was celebrating my birthday in a Boston bar when the album debuted at Midnight CST.

Because of this last-minute finish, of course, we had no time to give blogs and magazines a preview cut. Despite that, we made the bulk of our sales in the first few days before we’d recieved coverage anywhere. Which is awesome.

Once I started submitting the music to blogs, NHA had already been available for two days. My campaign converted more or less exactly how I expected it to — we’ve previously noticed that the vast majority of hip hop blogs are far more likely to post a single track than to announce an album. We will be following up with single tracks off the album in the weeks to come, in order to maintain our momentum and try to extend the tail further.

A Side Note on Timing.

Artists generally want to imitate major labels and get the biggest “Launch” that they can. This might be The Wrong Idea. We’ve previously discussed the promo tail here on Audible Hype: after the initial spike of traffic and visibility, your actual results (traffic, impressions, conversions, sales, collections) will always start dropping off, sharply. This is true whether you’re a local act or Jay-Z.

With No Humans Allowed, we’ve accidentally hit on something new. Staggering your promotion defeats the promo tail. I obviously need to get more data, but I also suspect it creates better results because it creates more points of contact for your project. When Potholes ran their coverage, it was over a week after the album dropped and gave us a huge boost. If we can land a few more high profile spots like that, we’ll be looking at something new: a mountain range, instead of a long ramp back down to zero.

I’m really interested to hear if anyone else has experience with this. (I know from watching the moves that Mello Music Group makes with their back catalog and album promotion that they’re definitely working in similar territory, and it’s very clearly working for them.)

No Humans Allowed is for sale only on Bandcamp, for a minimum of $3. Our goal was to raise enough money to pay for an initial short run of CDs to sell at shows. We accomplished that in the first two weeks. Once we started seeing sales pileup, Bandcamps 15% bite became really visible. Just the same, I am not aware of a better service for independent musicians. It looks perfect, it works 100% of the time, and we’re collecting emails from fans — most encouraging of all, over 40% of our sales have been to folks who aren’t on any of our existing lists, so we’re either reaching new people or converting old lurkers.

The $3 minimum was a compromise born of a very inebriated late night meeting on May 4th. Being a feral hippie, I wanted to let people download the album for free if they wanted, but Lou was set on charging a hard minimum — and it turned out he was right. I’ve had pretty much 100% of my mentors tell me since that we need to start getting our fans used to paying for our product, especially now that it’s taken a quantum leap in quality.

Here’s how the numbers look as of this week. Our sales broke down with eerie precision in even thirds. The first third paid the $3 minimum. The second third paid $5, and another 33% paid $10 or more. (Strangely, there were absolutely no purchases between $5 and $10…I dunno either.) We made 5 sales for over $20, which obviously made up the bulk of our CD funding.

No Humans Allowed is intented to be a live brand, rather than a one-off project, so we’ve already been working on NHA II for about a month now. Between Louis Mackey and myself, we’ve got a huge catalog to draw from and our big project in between albums is perfecting our live set. Louis Mackey has a day job in Boston, which is a great way to keep our focus on high-profile and paying gigs. I’m willing to go into new markets and rock a set in front of strangers for zero dollars, so I’m going to be the ambassador for 2011 and beyond as we get No Humans Allowed (and World Around in general) plugged in around the country.